My Golden Egg is the forty-second and final Silly Song with Larry of the original series. It is the only Silly Song to feature the Netflix design of VeggieTales.

Announcer
And now it's time for silly songs with Larry. The part of the show where Larry comes out and sings a silly song. We join our veggie friends for their annual Easter tradition.

Bob the Tomato
Okay kids, ready for the Easter hunt?

Larry the Cucumber
I got my hat. I got my net.
I got binoculars, metal detector. I'm set
For a expedition. I'm a cuke on a mission. (Laura Carrot: Yay!) The greatest Easter egg hunt yet.

I'm good to go. I'll find the prize.
At the safari store, I bought all their supplies.
Life will be sweet when my beautiful treat
Is right before my eyes.

My golden egg has my name on it.
It would be mine. All mine. All mine because I want it.
It's there for the dickens. (Bob the Tomato: Ready? Go!) From a bunny or chicken.
Soon I'll be holding my golden egg.

Larry the Cucumber
In the deepest darkest jungle, there are many scary things.
I am always on the look out for whatever bites and stings.
I run or crawl deep down low. I go wherever eggs they rome.
Remember, I'm a professional. So don't try this at home.

No luck? Okay. My search go widen
To just beyond this lava pit. I'm sure that where's it's hiding.
I'm overcome each hardship. I make it through each mess
Because I might possess

Larry the Cucumber
And now she has her happy hands arounds it.
I'm defeated. Oh, it's nothing what I got.

Laura and Larry
But maybe.

Larry the Cucumber
But maybe.

Laura and Larry
But maybe not.

Larry the Cucumber
I still have my golden egg. Thanks to the caring
Of my competitor who's hard believe in sharing.

Laura Carrot
This bowl's made for peeling.

Larry the Cucumber
What a wonderful feeling.

Everyone
Cause now we are holding our golden egg.

Announcer
This has been Silly Songs with Larry. Tune in next time to hear Larry say...

Larry the Cucumber
This is awesome. I love eggs. 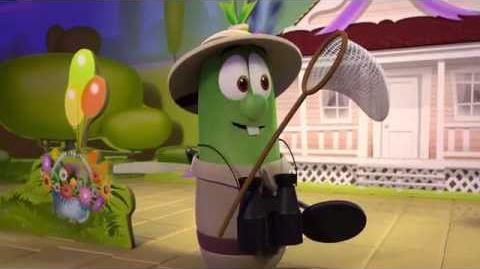 VeggieTales My Golden Egg - Silly Song
Add a photo to this gallery
Retrieved from "https://bigidea.fandom.com/wiki/My_Golden_Egg?oldid=208339"
Community content is available under CC-BY-SA unless otherwise noted.