Mr. Nezzer is a major protagonist from Big Idea's famous animated production, VeggieTales. He was replaced by Ichabeezer in the Netflix shows due to DreamWorks having a policy against interracial casting (his voice is based on Oogie Boogie from Tim Burton's The Nightmare Before Christmas, who was voiced by Ken Page).

He returned in The VeggieTales Show but with a new voice actor, David Mann. However, Phil Vischer continues to be his understudy.

He is a middle-aged zucchini with white hair and often wears a tie. In his debut episode, he portrayed as Nebby K. Nezzer, as well as he and Mr. Lunt work at the chocolate factory. 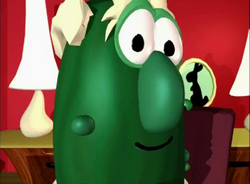