Mr. Lunt is one of the main characters from VeggieTales. He is usually paired up with Mr. Nezzer.

In his first appearance, he worked alongside Mr. Nezzer at his chocolate factory, and follows every order he tells him to do. He later worked for his brother in Dinkletown when they planned to produce the Buzz-Saw Louie toys.

Mr. Lunt is a yellow decorative gourd with a moustache. He often wears a beige safari-like hat and uses the brim for expression. In the Netflix series, he looks relatively the same, but now wears a white suit and has an additional goatee, and he no longer has a gold tooth. He changed back to his normal design for The VeggieTales Show, albeit with his hat's brim being changed to a light beige color. 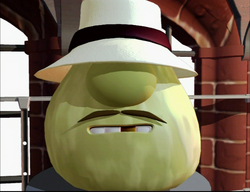