"Soon Larry-Boy will unwittingly be helping us take over Bumblyburg!"
— Mother Pearl; Leggo My Ego!

Mother Pearl is a major antagonist towards Larry-Boy. She is paired with her son the Alchemist.

On paper, she is regarded as the Alchemist's sidekick. But in reality, Mother Pearl is the true mastermind of the crime team. It is her who comes up with their strategies, while her son does all the grunt work.

Mother Pearl helps out her son by making Larry-Boy feel himself down after being sprayed by a special chemical that shrinks others (eg. claiming that Officer Olaf, Herbert and Wally as the true heroes). Even though he finds out their hideout, she and the Alchemist used a machine to create Alter-Ego to defeat the plunger-headed hero.

But that backfired after Larry-Boy becomes humble towards others and ultimately was caught by the police. But not before she gets sprayed by his son's chemical, which after insulting him for being a klutz. Larry-Boy captures her by using his plunger ears to tie her up. Both she and the Alchemist were sent to jail for their crimes.

Mother Pearl is quite cunning, and is considered more calm compare to her son. She likes calling him by his pet name "Cubby", which aggravates him a lot. When dealing with Larry-Boy, she is very manipulative into making him believe that he's superior to everyone else.

Mother Pearl is a white onion with green hair and brown eyebrows. She wears a purple robe over her body and a gold tiara. 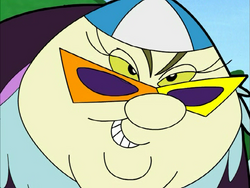 Retrieved from "https://bigidea.fandom.com/wiki/Mother_Pearl?oldid=165154"
Community content is available under CC-BY-SA unless otherwise noted.