Minnesota Cuke and the Search for Noah's Umbrella

"When Noah did what was right, he felt God smiling at him
and he could ignore all the laughing. God's favor covered him like a shield.
So if I think about God smiling at me, I can ignore the laughing.
When you're doing what's right, God's smile covers you up!"
— Julia comforting Minnesota

Bob introduces the show, but notices that Larry has a paper bag over his head with a frowning face. Larry explains that he was made fun of at Burger Bell for praying to God for his meal, and that he feels embarrassed. Bob decides to forgo the show he had planned in order to tell a story to help cheer Larry up.

Minnesota Cuke and the Search for Noah's Umbrella

A young Minnesota Cuke and Marten are playing hide and seek. As Cuke finds a hiding spot, he overhears a group of young scallions talking, as one of them says how he stole the famous Muskie of ‘47 from Farmer Brown. Minnesota chases after them and takes back the Muskie, but stumbles after going back to his hiding spot. Years later, Minnesota chases after the scallions to get the Muskie again, only to once again stumble and make a fool out of himself.

Frustrated, Minnesota returns to the Moose Lake’s Children Museum, as Marten introduces him to Humphrey Muffet. He explains that he wants to build a Bible-themed goldfish pond in his backyard, and that he wants the real Noah’s Ark as a decoration for the park. He says that he had sent Minnesota’s former nemesis, Professor Rattan to find the Ark, but he has been missing. Mr. Muffet gives Minnesota a copy of an ancient instruction book Rattan had followed, stating that the first clue to find the Ark is in the pyramids in Mexico.

Minnesota heads to Mexico and meets with Julia, who has opened a new ice cream stand and performs in musical theater. Julia states that she had recently taken Rattan to see the pyramids. As Minnesota is set to travel to the pyramids, a group of children surround Julia’s stand, asking for her to perform. Minnesota tries to perform alongside her, but embarrasses himself as the audience laughs at him. Minnesota and Julia arrive at the pyramids and read the directions in the instruction book, reading they would have to walk backwards up the stairs of the pyramid in order to see the clue. The two do so, but are made fun of by the other tourists. Minnesota storms off, but Julia sees the clue of a checker-patterned umbrella as the sun hits the floors near the pyramids. Julia takes a photo of the clue, but is promptly kidnapped. Minnesota chases after the kidnapper, but is only able to recover Julia’s purse. Minnesota calls Marten to tell him what happened, and discovers a postcard from Rattan in Julia’s purse, saying that he would be heading to the village of Erzurum, Turkey. As Minnesota finishes his call, he heads to Turkey to find Rattan and Julia.

In a movie theater in Erzurum, Rattan is being held captive by his evil twin brother, Wicker. Wicker is looking for Noah’s Umbrella, an umbrella hidden inside the Ark that he believes has the power to change the weather. He asks Rattan about the location of a film that holds another clue to the location of the ark, but Rattan refuses to speak, leading Wicker to throw Julia in the same closet he has locked Rattan in. After Wicker leaves, Julia unlocks the door with her hairpin, allowing her and Rattan to escape. Minnesota arrives in Turkey, but is mocked for carrying Julia’s purse. As Minnesota is being laughed at, the man who kidnapped Julia steals the instruction book from Minnesota, who chases after him to get it back. As Minnesota is searching for the book, he runs into Wicker, who he believes to be Rattan. Wicker tricks Minnesota into playing the film Rattan was keeping from him, as it was sent to Minnesota to keep Wicker from finding it. As Wicker attempts to play the film, Minnesota runs into Julia and Rattan, who takes the film back and gives Minnesota the original instruction book. The instructions say to go to the Kuman Inn, an old hotel in Turkey that reveals an entrance to the Ark when a song and dance are performed. As the three head to the inn, they are chased by Wicker and his potato guards, whom Julia locks inside the theater.

Minnesota, Julia and Rattan arrive at the inn, but Minnesota is shocked when he learns he has to dance and sing in front of a crowd of patrons in order to reveal the entrance of the Ark. Minnesota and Julia perform, but Minnesota quits as he is laughed at by the patrons. Wicker and his guards arrive at the inn, kicking out the patrons and finishing the dance. The entrance to the Ark is revealed, but Wicker captures Minnesota and his friends in a cage, leaving them dangling over a cliff for them to be dropped off of. Rattan asks Minnesota of a plan to escape, but Minnesota is still dwelling on being laughed at so many times. Julia compares Minnesota’s actions to the actions of Noah, who were both laughed at for doing the right thing. She says that God’s love surrounded Noah so he could ignore the teasing, and that He does the same for Minnesota. Minnesota then uses his whip to get everyone out of the cage and chase after Wicker, using the remains of the cage as sleds to travel in the icy caverns containing the umbrella. However, they are once again captured by Wicker and his guards.

Wicker uses Minnesota to go through the tests in the cavern in order to get the umbrella, with the threat of his friends being buried by an avalanche if he doesn’t. and Minnesota goes through the first two tests, including giving change to a statue of an old man and praying before eating a plate of cookies. He’s laughed at by Wicker and the potato guards, but he remembers God’s love, and passes each test, while Wicker and the guards fall victim to the cavern’s traps. Minnesota reaches the final test, having to pick Noah’s umbrella from a wall of umbrellas. Minnesota texts Julia about the clue at the pyramids, and she sends him the photo of the clue at the pyramids. Minnesota picks the correct umbrella, as Wicker takes it from him, hoping it will give him power. After realizing it doesn’t, his guards start to laugh at him, leading him to scream out loud. Wicker’s scream causes an avalanche, leading everyone to flee from the caverns.

As everyone escapes the caverns, Mr. Muffet shows up with the Canadian Mounties, to arrest Wicker and his guards. Somewhat disappointed that they were unable to find Noah’s Ark, Mr. Muffet reveals to Minnesota that Noah’s umbrella offers a greater treasure, a Bible verse printed on the inside:

"Surely, O Lord, You bless the righteous; You surround them with Your favor as with a shield."
—

The umbrella is taken to the Children’s Museum, where it is put on display. It is later shown that the Kuman Inn has, all along, been the real Noah’s Ark.

Back on the countertop, Bob notices that Larry’s paper bag has a smiling face drawn onto it, instead of a frowning face. Larry’s bag then keeps changing expressions at whim, scaring Bob and leading him to throw away the bag. Bob and Larry then go over to Qwerty to read the Bible verse:

"Being afraid of people can get you into trouble, but if you trust in the Lord, you will be safe."
— Proverbs 29:25

Bob and Larry recap the moral of the story, as Jimmy comes in wearing Larry’s paper bag. 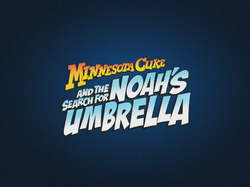