Michelle Frances Conrad is a seven-year-old girl who is a member of the Rockhopper crew from the Federation. She is also the twin sister of Jason.

She went with her brother to Grandmum's cottage when their parents went on a business trip.

Like her brother, Michelle is smart and clever. However, she can be stubborn sometimes. She may think she knows a lot, but she realizes she has a lot to learn from her penguin friends.

Michelle Conrad has long brown hair in pigtails, black dot eyes and freckles. She wears a blue T-shirt with a yellow flower on it, purple shorts, blue sandals, and pink glasses.

Michelle Conrad appeared in every episode of 3-2-1 Penguins! 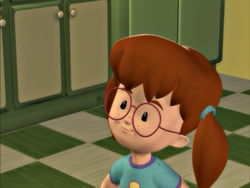