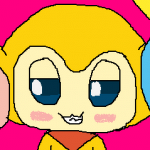 I am the purveyor of many international dubs of Big Idea's shows: you can contact me right here for this and other cool stuff!

Oh yeah, remember to abide by this wiki's rules or your message will be deleted the MOMENT I see it.