Merry-Go-Wreck is the fourth and final LarryBoy Super Short.

After Bok Choy demonstrates his class how to capture villains, he asks a student for a special assignment once class is over. Eager to help, LarryBoy decides to do it, only to find out that he has to clean out chalk erasers. Classmates Lemon Twist and Electro-Melon offer the plunger hero that he can come to the amusement park with them after he is done with the chores.

Things go well at the amusement park, until both Lemon Twist and Electo-Melon start creating chaos at the various rides and games they interact (eg. merry-go-rounds, bumper cars, ring tossing), which lead them both arguing who should clean up the mess.

LarryBoy eventually finishes Bok Choy's assignment, and decides to head out to the park before his teacher would give him more to clean. He discovers the park is in complete shambles, thanks to the two bickering and argumentative heroes. He stops the commotion and tells both Lemon Twist and Electro-Melon that they need to work together to repair the mess, and the two put aside their differences and help tidy up. They then produce both cotton candy and popcorn using their superpowers. After LarryBoy compliments how great the food tastes like, the three enthusiastic superheroes laugh together. 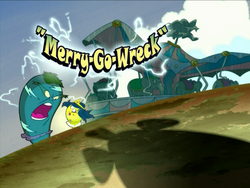