Madame Blueberry is the tenth episode of VeggieTales. This story's protagonist is the character with the same name and is loosely based on the French novel "Madame Bovary."

The show opens up with Bob alone with Larry driving a vehicle in the background. When Larry drives up, he says that it is his new "Suzy Action Jeep," a thing that Larry has been wanting for a long time. He also says that he also needs the "Suzy Action Camper" next. Wondering how much stuff that Larry needs to be happy, Bob asks for a story based on Larry's desires for new stuff. Hearing Bob's request, the French Peas come by and tell the story of "Madame Blueberry."

We then transition into what seems to be the usual Silly Songs with Larry segment, but then Archibald Asparagus interrupts and makes an announcement that because of what happened during the previous Silly Song in the previous episode, Silly Songs will have to be cancelled until further notice. We then get "His Cheeseburger" (a.k.a. Love Songs with Mr. Lunt).

Leaving Love Songs with Mr. Lunt, we see that the gang are on the way to the Stuff-Mart. Madame Blueberry and the rest of the gang notices a poor little girl wearing a black cap and a peach blouse and skirt celebrating her birthday with one piece of pie that her family could only afford. She then sings about being thankful for what she has. Madame Blueberry begins to wonder what makes her happy despite being poor, but forgets upon entering the Stuff-Mart. Once inside the giant store, she begins to buy a lot of useless products and has them shipped to her house. At the food court, Madame Blueberry notices a little boy excited about a train set that he has always wanted, but his dad says that he cannot afford it and asks if he would like a ball instead. The boy changes his mind by saying yes to the ball, and sings the same song the poor girl sang earlier. Wondering why the children who do not have a lot are happy and she is grumpy while she has a lot, Madame Blueberry realizes that they have happy hearts and that buying a lot of useless things is not making her any happier. She dismisses the Scallions and heads on home.

As the trio head on out, they notice that Madame Blueberry's house is tipping over from the excessive amount of bought items. The gang get in shopping carts (except Larry, who is in a carrying basket) and head over to the house to stop the remaining deliveries from flooding the house. As they head there, the back door begins to open, so the items everywhere in the house begin to pour out and land in the lake behind the house. Bob thinks that her house is alright, but right on cue, the sudden loss of weight causes the house to be flung across the town and crash-land upon a dangerous impact.

Back on the countertop, Bob and Larry are sobbing emotionally about the story. The French Peas appear again and, now in an impatiently manner (despite being guests), remind them that they need to wrap up the show. Then, they head over to Qwerty for the bible verse of the day. The Bible verse that Qwerty pulls up is Proverbs 15:27a: "He who is greedy for gain troubles his own house." Larry decides that even if he never gets the camper for his jeep, he will be happy for what he already owns as they sign out, ending the show.

Madame Blueberry was actually conceived during the early process of VeggieTales when Phil Vischer and Mike Nawrocki were thinking of spoofing classic literature, before Where's God When I'm S-Scared? even came up. Mike Nawrocki read Madame Bovary in college, and after production on VeggieTales started, he wanted to adapt a happy version of the story after seeing how it reminds him about everyone in his life. He also took some basis from Dr. Seuss' "How the Grinch Stole Christmas," where the main character has a change of heart and a big climax. 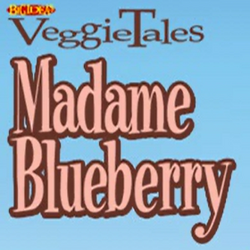