Madame Blueberry is a French blueberry who likes having anything she wants, though very friendly to everyone. She is also the mayor of Bumblyburg in the main Larry-Boy series.

In her debut episode, she wanted more things after seeing all the nice stuff all her friends got, and sobbed about it. Later, some salesmen showed up and told her about the new store called Stuff-Mart that has everything she wants. 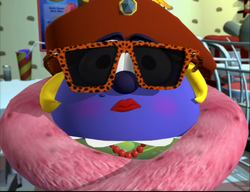