"The greedy impale themselves on many heartaches"
— The Apostle Paul

Lunch is an animated short. It was originally shown in various film festivals until it was first released at Antioch Theatre on July 21, 2001, and it was shown in The Wonderful World of Auto-Tainment! and Lessons from the Sock Drawer.

A blue man named Ed and his green dog Mozart are having lunch at the park. Inside the lunch bag that Ed is holding are a sandwich for Ed and a bone for Mozart. Ed gives Mozart a bone as he takes out his sandwich from his lunch back. Ed then starts out on his sandwich before he notices a billboard advertising a new candy bar called "Grav-ee-Crisp", which supposedly tastes like meat. Feeling curious about this new meat-flavored candy bar, Ed stares at the billboard while his dog Mozart is watching him. He wonders what his owner is up to, but then he shrugs and continues biting and chewing on his bone. Just as Ed is about to eat the rest of his sandwich, he notices a Grav-ee-Crisp candy bar vending machine, which he is excited about as he runs over towards the machine, before throwing his sandwich back into his lunch bag right in front of Mozart.

After a few seconds of deciding whether to hold up the vending machine or to reach the candy bar, the machine then falls on top of Ed, but he comes out from underneath it unharmed. Ed looks around in the park to find the Grav-ee-Crisp candy bar, but when he finds it laying on the ground, he becomes excited, before he unwraps it, but just before he can take the first bite from it, it gets pooped on by a passing bird, much to his dismay. The bird then flies away to migrate south for the winter along with its family. This saddens Ed very much, before he facepalms, at the same time that Mozart then throws his bone at him afterwards as the short ends. 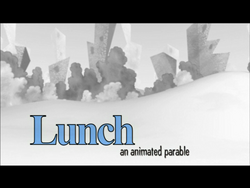 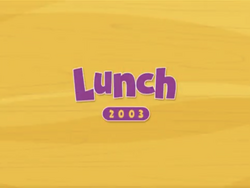 Retrieved from "https://bigidea.fandom.com/wiki/Lunch?oldid=203746"
Community content is available under CC-BY-SA unless otherwise noted.