Lessons from the Sock Drawer is a special VeggieTales compilation.

A boy named Edmund has a pet hamster who disappeared after he accidentally leaves the top off its cage, so he writes to Bob the Tomato and Larry the Cucumber for advice. During countertop vignettes in which Larry and Bob interact with the puppet-wielding Khalil and Mr. Lunt, the group tries to find suitable stories (from previous VeggieTales videos) to help Edmund. The pair then help Edmund using the video shorts and elements of the verse:

"A happy heart is good medicine and a cheerful mind works healing."
— Proverbs 17:22

Although the video exclusively utilizes previous shorts and music, save for the countertop vignettes, the presentation is exactly like any original VeggieTales video with the letter, countertop dialogue, and scripture verse. 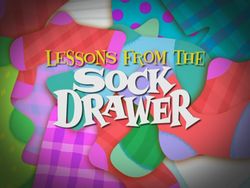 Retrieved from "https://bigidea.fandom.com/wiki/Lessons_from_the_Sock_Drawer?oldid=212802"
Community content is available under CC-BY-SA unless otherwise noted.