Lola Twizzle, also known as Lemon Twist. She is a superhero and is one of Bok Choy's students at Bumblyburg Community College.

Lola didn't know she had any super abilities until during a merry-go-round contest at school and she literally blew away the competition! Thus, she took the name Lemon Twist. One time after Bok Choy's class was over, Lemon and Electro-Melon went to the Bumblyburg Carnival to have some fun. However, due to their differences, they both started fighting and create destruction at the carnival. Fortunately, Larry-Boy arrived and told them what they did, and they later became good friends.

As a child, Lola is very well-mannered and respectful. Though, she could also be obstreperous and argumentative, so she could lose her temper if anything irritates her, such as the one time Larry-Boy pestered her about who Gale is and when Electro-Melon tried to ruin the fun at the carnival. Regardless, she is an extremely nice, caring, and thoughtful lemon.

Lola is a yellow lemon with navy blue hair. Her costume is a lime green suit with white rims, black mask, and a gold tiara. Twist has the abilities to create storms, strong winds, and tornadoes. 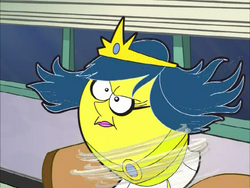