Leggo My Ego! is the second episode of LarryBoy: The Cartoon Adventures.

Things seem normal in Bumblyburg until LarryBoy notices that the residents are mysteriously shrinking. LarryBoy discovers this is the work of the Alchemist who uses a flower loaded with a mysterious powder which has the ability to shrink those who are exposed to it. The Alchemist and his mother capture the residents of Bumblyburg, taking them to their lab, and turn their orange clouds into generating a super evil replica of LarryBoy. the replica grabs LarryBoy by the head (with one of his plunger ears) and bumps LarryBoy back and forth like a game of paddleball. LarryBoy enters the lab and defeats the replica (Alter-Ego) by telling everyone how super they are, putting everyone back to normal size. The Alchemist then takes Bob hostage and Bob is rescued by the brothers Herbert and Wally, who squish jelly donuts in a way the jelly fires at the Alchemist, causing him to lose his grip on Bob and accidentally release the shrinking powder on his mother. His mother, in retaliation, flings the powder back at him, causing him to shrink as well. The Alchemist and his mother are then arrested for their villainous actions. 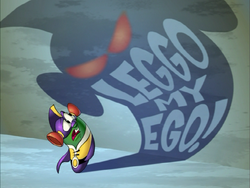 Retrieved from "https://bigidea.fandom.com/wiki/Leggo_My_Ego!?oldid=222116"
Community content is available under CC-BY-SA unless otherwise noted.