Laura Carrot is a friendly little girl who is one of the main characters from VeggieTales.

Laura lives in the city of Bumblyburg with her parents, Mom and Dad Carrot, as well as her two younger brothers, Lenny and Baby Lou. She is best friends with Junior Asparagus, and is very close with other Veggie kids such as Percy Pea, Annie Onion and Callie Flower. She is also good friends with Bob and Larry,

Laura first appeared alongside her father and brother Lenny in the VeggieTales episode Are You My Neighbor? as one of the inhabitants of Jibber-De-Lot in the Story of Flibber-o-loo segment. It was't until the following episode, Rack, Shack and Benny, that she was properly introduced. It is here where she established her high-spirited personality.

Since then, Laura has gone on to appear in many VeggieTales episodes and series as a lead and supporting character. Some of her more notable roles include Miriam in Babysitter in DeNile, Princess Poppyseed in Princess and the Popstar, and portraying herself in many LarryBoy episodes.

In VeggieTales in the House and in the City, Laura took on a superhero alter-ego named Night Pony. She later joined and helped form the League of Veggie Heroes alongside other superheroes inside the house.

According her official bio, if she weren't an actor, she'd be scootering around town on her scooter.

Laura is sweet, outgoing, and fairly courteous. She always tries to be the voice of reason, often trying to prove a point to her friends. While her friend Junior is more ambitious, Laura is more cautious. However, Laura isn’t afraid to get herself or others into a little mischief every now and again.

Laura is a small orange carrot. Her body shape resembles that of a baby carrot. She has bright blonde hair that is tied into pigtails.

In her early appearances in VeggieTales, she had freckles on her cheeks, her hair was styled with a large middle part, and her pigtails were tied with brown hairbands.

Later on in the 2000's, Laura got a makeover for Big Idea's first feature film Jonah: A VeggieTales Movie. She began wearing a blue hair bow and was given a new hair style with bangs and shorter pigtails. Her freckles disappeared as well, and sometimes she wore a blue dress.

In 2014, Laura was slightly redesigned for the VeggieTales episode Celery Night Fever, where she got another big makeover. Her body shape became significantly thinner, now tapering down to a point, much like a carrot when it's pulled from the ground. Her freckles returned, her hair was straightened (removing her pigtails), and her outfit was changed to a green striped button-up shirt with a blue skirt and head band. She wore a large pair of glasses with blue frames as well.

In VeggieTales in the House and VeggieTales in the City, Laura was completely redesigned along with the rest of the VeggieTales cast. Her body shape became much more stylized, now appearing stockier in her build. Her hair was styled in a way that resembled her hair from the 2000's, now tied into two small ponytails with a prominent side part. She kept her freckles and gained blue irises, small eyelashes, as well as dark brown eyebrows. Her outfit changed to a pink and orange plaid dress with a magenta jacket bespectacled with a gold button and a flower design embroidered on the back. Her hair bow returned as well, now pink instead of blue.

For The VeggieTales Show, her design was reverted back to her appearance from Celery Night Fever. 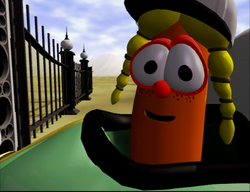