Lord of the Beans is the twenty-seventh episode of VeggieTales.

The story is a parody of J. R. R. Tolkien's "The Lord of the Rings" series and the film trilogy.

Larry shows up with his surprise he got from the mail; a unicycle! He almost crashes into the sink when he got control over it. Bob was astonished that he can ride one without touching the pedals. Larry thinks he has a gift, and he's gonna use to become rich and famous. 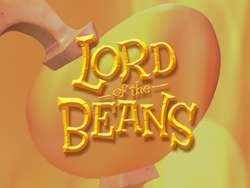 Retrieved from "https://bigidea.fandom.com/wiki/Trouble_on_Planet_Wait-Your-Turn/Commentary?oldid=8487"
Community content is available under CC-BY-SA unless otherwise noted.