LarryBoy and the Angry Eyebrows

LarryBoy and the Angry Eyebrows is the first episode of LarryBoy: The Cartoon Adventures.

A cheese-breathing cow dragon robs a carrot lady and her spuds of their lunch. As soon as our hero, LarryBoy, arrives, he gets "cheesed." Nevertheless, he pulls out his Radar-Guided Spatula to block the creature's cheese shots. When the creature gets caught, it actually turns out to be Herbert and Wally in a disguise to steal food because they were really hungry. Officer Olaf, Bumblyburg's local police officer, arrests the two for the food robbery and for shooting cheese at innocent people of Bumblyburg.

Meanwhile, Awful Alvin, one of LarryBoy's nemesis, is determined to rule Bumblyburg along with Lampy (a lamp with a silly face drawn on its shade).

At BumblyBurg's local newspaper office, The Daily Bumble, the newspaper staff meets together in Bob's office to discuss tomorrow's headline. Junior suggests it be about a famous inventor, Ma Mushroom, who demonstrates her new invention, The Knit-Master 3,000. Bob declines it because "most of the citizens in Bumblyburg never get any hair in their drains, because most of them don't have any hair." Larry is busy mopping the floors and suddenly an alarm goes off on his mop. He hides in the broom closet to avoid being noticed while talking to his butler, Archibald. Upon realizing that tonight is the night at Superheroes 101 at Bumblyburg Community College, and that he is nearly late for it, he rushes off.

However, in his hurry, Larry accidentally destroys the Knit-Master 3,000. Ma grows very angry, but Larry offers to have someone fix it. She tells him that "there better not be a scratch on it, or else!" Meanwhile, Alvin has set up an evil scheme on LarryBoy and his precious city, which involves a fleet of his angry eyebrows. He sends them to seek out anger, while crying out "Fly, my bushy minions! Fly and seek out anger!".

Larry realizes that he is going to be late for class again by the time he takes the Knit-Master to Archibald for repairs. When he finally shows up at class, Bok Choy scolds him for being late for the fourth time, but lets go of his anger. Bok Choy tells the class "Do not let the sun go down on your anger. Be warned young ones, if you hold on to your anger, your anger will hold on to you."

The next morning, Ma Mushroom is still mad about Larry breaking her machine. A flying angry eyebrow then swoops down and attaches to her forehead, followed by another angry eyebrow attaching itself to the Carrot Lady, causing both them to act very nasty to their local citizens. Back at the Daily Bumble, Vicki talks to Bob about people with big black angry eyebrows committing random acts of anger all over the city. Up on the roof, Larry has finally found a perfect place for the freshly fixed Knit-master. As he heads back to the elevator, he spots Lampy, making him rush to talk to Archibald.

Back at Bob's office, Larry encounters an angry Ma Mushroom. He quickly runs in the broom closet and then comes out in a disguise to trick Ma Mushroom into finding "the real Larry" in the closet. Just then, his mop beeps again. Since he locked Ma in the broom closet, Larry hides in the bathroom. Upon learning Alvin's scheme, he rushes to the Larry-Cave. He tells the citizens that he has come to remove their angry eyebrows, but the Carrot Lady tells him to leave them alone alone because "we're busy being angry". LarryBoy pulls out a pair of tweezers to remove the eyebrows, but it is useless.

Just then, LarryBoy encounters Awful Alvin. Alvin tries to stick his angry eyebrows to Larry, but Larry tells Alvin that he is not holding on to anger. So Alvin tries the best of his power to make LarryBoy mad. Alvin puts a popsicle down Larry's back, blows a trumpet in Larry's ear, and then fills the Larry-Mobile with chocolate syrup. After seeing the eyebrows pour chocolate syrup in Larry's Mobile, LarryBoy becomes enraged and an angry eyebrow sticks to his forehead. Something Alvin says reminds Larry about what he learned at superhero class. When he realizes this, he tries hard and eventually lets go of his anger. All of the citizens in Bumblyburg see this, and let go of their anger as well. However, in turn, Awful Alvin sends his angry eyebrows to capture LarryBoy.

LarryBoy quickly comes up with a plan. He pulls off his cape and waves it like a matador to trick the eyebrows into flying into the Knit-Master 3,000, turning them into a giant, colorful nightcap. Alvin becomes angry, which causes the nightcap to come to life. He tries to outrun the nightcap, but it traps him underneath it. Alvin is then put under arrest for his villainous actions.

Meanwhile, at The Daily Bumble, Ma Mushroom is finally let out of the closet to find that her invention was fixed. She is then given a medal for building the Knit-Master 3,000, which helped LarryBoy save Bumblyburg. Realizing she is a hero, Ma Mushroom finally lets go of her anger and the last Angry Eyebrow flies away. 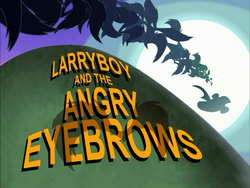 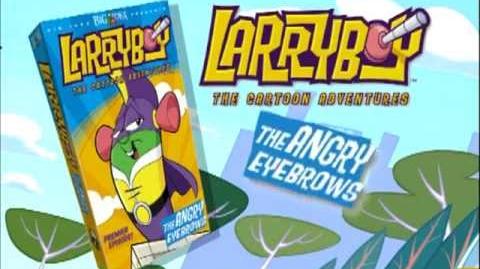 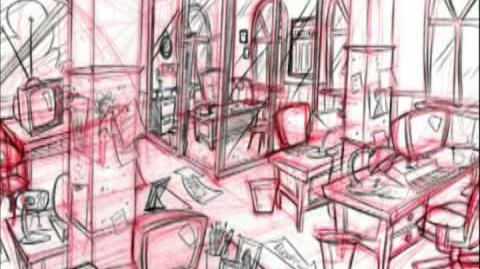