An Easter Carol is the 21st episode of VeggieTales.

It is the sequel to The Star of Christmas, and a parody of Charles Dickens' " A Christmas Carol".

A local church is going to unveil a new stained glass window on Easter. Businessman Ebenezer Nezzer used to attend this church with his grandma when he was little, so Reverend Gilbert and his son Edmond agree to pay Ebenezer a visit and invite him to the Easter service.

Meanwhile, at Ebenezer's factory,(which is full of mechanical chickens hatching plastic Easter eggs) Cavis Appythart and Millward Phelps are arguing over who should approach Ebenezer and ask for a day off for Easter. When they finally do ask, Ebenezer tells the pair about how his grandmother started the Easter holiday by making Easter eggs. He recalled that before his grandma died, she told him to tell everyone "Easter means no death". However, Mr. Nezzer misunderstands this, thinking that as long as he makes Easter eggs he will keep his grandma alive forever. That's why he plans to tear down the local church and build Easterland in its place, Cavis and Millward are shocked at the idea. Nonetheless, Mr. Nezzer asks the pair to help him in the deed, but they refuse and Ebenezer angrily fires them. The people are worried about the demolition of the church, but since Mr. Nezzer owns the property they are unable to stop him.

That night, Ebenezer falls asleep when he sees a vision of his grandma telling him he has missed the point of Easter and at the stroke of midnight, he will receive a second visitor to help him understand. Meanwhile, Cavis and Millward are trying to break into the factory to steal the Easterland plans despite being on probation for stealing the Star of Christmas in the previous episode. Mr. Nezzer then wakes up from his vision and intends to stay awake for the visitor. Falling asleep again, a clockwork egg suddenly opens and Hope emerges. She wakes Ebenezer and starts showing him an Easter in the past where young Ebenezer and his grandma are sitting in the church. Grandma is trying to help Ebenezer understand the story of Easter, but the youngster is mainly focused on selling his eggs and wondering why the egg he received is empty. Next, Hope shows him Easter from a year ago, when Ebenezer first started making plastic Easter eggs. Mr. Nezzer talks to an inventor and when he sings a song about how the inventor should make him plastic chickens that lay plastic eggs, the inventor agrees. However, Mr Nezzer does not pay him, instead giving him an early free pass to Easterland.

Hope and Ebenezer return to Easter present and visit the Reverend's house where a group is discussing that Grandma Nezzer paid for all the church windows and just before she died, she commissioned the new window that is going to revealed tomorrow. Ebenezer, however, is still fixed upon the legacy of his grandmother living on through his Easter eggs and Easterland. It is then revealed that little Edmond is very ill and will not live for another year if nothing changes. Ebenezer is shocked about how Edmond's parents are so calm with such news. Hope then takes Mr. Nezzer back into the church and teaches him the story of Jesus dying on the cross to save the sinners, and how his resurrection is the symbol of "hope" that inspired the Easter holiday.

Then Hope welcomes Nezzer to 'Easter future'. The church is being demolished, the orphanage is gone, Little Edmond has died, And without the Hope of Easter, the town's once-brave policeman has lost courage to stop criminals. Hope disappears back into the egg and Ebenezer pleads for her to come back because they need her. He rushes back to the church to try to stop the demolition, and wakes up. He finds out that it is still Easter Present and he still has another chance. Nezzer is able to stop the demolition crew just as they are ready to destroy the church. Millward suddenly rushes into and shouts that Cavis is trapped in the factory and the chickens are blasting. The entire place is set to blow. Nezzer rushes back into the factory to save Cavis and they escape by being shot out of one of the factory's windows by one of the machines just when the factory blasts. It starts raining Easter eggs across the town from the explosion and Nezzer promises to help young Edmond get the medicine he needs with the money he has left after fixing the orphanage. 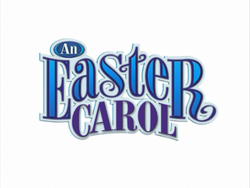 Retrieved from "https://bigidea.fandom.com/wiki/An_Easter_Carol?oldid=7708"
Community content is available under CC-BY-SA unless otherwise noted.