Larry-Boy and the Rumor Weed

"Even if it's true, God doesn't want us to tell stories that can hurt, He wants us to spread nice words."
— Mike Asparagus

Larry-Boy and the Rumor Weed is the second VeggieTales special (as the twelfth episode of the show), and the second Larry-Boy episode. It is the sequel to Larry-Boy! and the Fib from Outer Space!.

Prologue of the Story

Percy Pea and Lil' Pea are leaving a movie theater and are cornered by a shady Scallion (Scallion #3, the "Milk Money Bandit") who asks them for a nickel. Percy refuses, but the Scallion then demands the money he is carrying for milk money. After stealing the money and escaping to the rooftops with his loot, Larry-Boy (Larry the Cucumber) confronts him and shakes the stolen money off of him before throwing him into Officer Scooter's patrol car. Soon afterwards, he begins reviewing his capture technique with his butler, Alfred (Archibald Asparagus), but in the process, accidentally knocks an unfinished plant off the ledge. The plant gets caught on some telephone wires on the way down, where a woman is gossiping on the phone, then falls into the sewers, where the gossip brings the plant to life.

The next morning, Alfred is telling a story at a school and tells the teacher and the kids that he needs to go home and "recharge his batteries" (meaning he needs to rest). Not knowing that it's a figure of speech, Junior Asparagus and Laura Carrot take it literally and jump to the conclusion that Alfred is a robot. As they walk home, discussing what they had heard Alfred say, they encounter a small talking weed. Similar weeds begin to appear throughout town, spreading the rumor. Larry and Alfred are tending to a garden when Alfred heads inside to answer the phone. Another weed appears and tries to spread the rumor, but Larry doesn't listen. Alfred then calls Larry in. Mayor Blueberry (Madame Blueberry) informs him that strange weeds are growing all over the city and saying that the story that Alfred is a robot is a rumor. Suiting up as Larry-Boy, he dives into action.

Larry-Boy manages to find a weed and attempts to shred it with a weed whacker, which malfunctions. Back at the Larry-Cave, Alfred discovers that all the weeds are connected to a "Mother Weed" underground. Upon arriving in the sewer, Larry-Boy meets the Mother Weed and is quickly overpowered. Alfred learns the citizens are afraid of him, saying that he is a "killer robot with laser eyes." Suddenly, the Mother Weed breaks free out from underground and snatches Alfred, but the citizens refuse to help.

Dad Asparagus arrives and asks what is going on. The Mother Weed says she heard the story from "two very reliable sources." Junior and Laura confess that they took Alfred literally and started the rumor. Dad explains to them that what Alfred said was actually a figure of speech. Junior and Laura are confused. Dad then goes on to say that sometimes, grown ups say stuff that really means something else. In this case, when Alfred said he needed to recharge his batteries; he really meant that he was exhausted & needed to go home and rest. He also explains that "If you hear something about someone that sounds bad or even just weird, you should ask them about it or ask your mom or dad. But don't spread rumors. Even if it's true, God doesn't want us to tell stories that can hurt. He want us to spread nice words." Junior realizes that Alfred is not a robot. Dad then says that Alfred's a very nice man. And Dad's words cause flowers to grow on the Mother Weed. Junior and Laura decide that the best way to save Alfred is to spread good words about him. They convince the citizens that Alfred is not a robot and the citizens state all the nice stuff that Alfred has done for them (Mr. Nezzer saying that Alfred helped him with his dinner party, a scallion with a moustache saying that Alfred helped him change a tire, a cucumber lady saying that Alfred carried her groceries for her and Scooter saying that Alfred helped out with the police department's bake sale.) The Mother Weed continues sprouting flowers until she transforms into a giant flower. Alfred forgives the citizens of Bumblyburg for the misunderstanding just as a battered Larry-Boy drags himself out of the sewer.

Unaware of the preceding events, he almost accidentally starts the rumor again by saying someone told him Alfred was a robot (obviously the rumor weed), thus everyone gently shushes him, hoping the other Bumblyburg residents didn't hear what he just said. But he doesn't get it, and the story ends rather strangely with him asking if there was a flower show (having seen flowers on what was once the Rumor Weed), and everyone laughs, thinking it's a joke as the story ends with a choral reminder, and a flower landing on the screen.

Closing Segment (Back at the Larry-Cave)

In the final scene, Larry-Boy and Alfred enact their own What Have We Learned segment with the computer pulling up the verse:

""Reckless words pierce like a sword, but the tongue of the wise brings healing,""
— Proverbs 12:18

The story concept was written by Doug Peterson, which at the time Phil Vischer was accepting ideas for future episodes when the studio was growing. Mike Nawrocki was a bit skeptical at the time, due to the fact the episode sounded similar to the first Larry-Boy episode (kids caused trouble from something that grew big). But they eventually tweaked it to work it out. Phil at the time decided to push the limits on what they could do for the episode, since they were getting ready for their first feature film, and he originally considered this as the last half-hour episode they would work on. 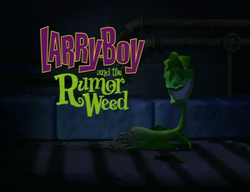