Larry-Boy! and the Fib from Outer Space!

"Even a little lie can get really big, really fast, and a big lie can just swallow you up. And Junior, you made a really big lie!"
— Fib to Junior

Larry-Boy! and the Fib from Outer Space! is the eighth episode of VeggieTales. The story is about Larry the Cucumber's super alter-ego, Larry-Boy, as he tries to battle an alien from outer space who grows from lies created by Junior Asparagus. It deals with the theme of telling the truth.

This is also the first of many episodes to feature the superhero centric misadventures of Larry-Boy.

On the countertop, Larry tells Bob that he just received an email from this kid by the name of Ezzio Vietti, who hails from Hackensack, New Jersey. In this email, Ezzio says that he just did something he knew he wasn't supposed to do and now his friends are telling Ezzio to lie about it so that he won't get in trouble. And now, he wants to know from both Bob and Larry what he should do. Larry says that the exact same thing happened to Junior Asparagus once. This provides the segue into the episode proper.

Larry-Boy! And The Fib From Outer Space

The story begins with Percy and his brother discussing the film they just saw and they see what appears to be a comet flying by in the sky. Jimmy and Jerry Gourd, who are staff at an early-warning radar station, notice the comet and alert Larry-Boy of it. Larry-Boy notices the signal and then starts up the Larry-mobile and drives off into the night. It turns out that the comet is really a blue alien that starts to walk off.

The next morning, Junior Asparagus and his buddy Laura Carrot are having a tea party. Junior decides to make use of his father's "Art Bigoti" limited edition collector's plate for Mr. Snuggly. While trying to retrieve it, the shelf tips and the plate breaks. Laura immediately leaves. The tennis ball-sized alien "Fibrillus Minimus" (or Fib, for short) emerges from behind Mr. Snuggly and convinces Junior to lie to his dad claiming that, "A little fib couldn't hurt anybody." Junior is unsure, but when his dad soon notices the broken plate and asks his son what happened to it, Junior lies and says that it was Laura who broke the plate by using her new apple chopper on it. Junior's dad naively buys the lie and decides to call Laura's dad and talk to him about what happened. Fib comes out of hiding and congratulates Junior, although Junior notices that Fib looks a bit bigger. Fib shakes this comment off and then the two of them leave the crime scene unpunished. Larry-Boy begins to search for the alien but passes him, but not before greeting Junior and Fib.

Later on, Junior is confronted by his friend Percy. Fib then goes and hides in an alleyway. Percy tells Junior about the situation with the plate and expresses his confusion at the claims that two different people broke the plate. Junior decides to pin the blame Laura's brother Lenny for breaking the plate by giving it to a crocodile to chew it up. Like Junior's father, Percy naively buys the story and leaves him be. Junior tells Fib that it worked again. Only now, Fib has now grown and has gotten feet.

Larry-Boy reports to Alfred that he has found no extraterrestrial life in Bumblyburg and is therefore heading back to the Larry-Cave because he has been driving around in the Larry-mobile all day. Not to mention, he is tired, hungry, and in desperate need of a bathroom. Also, the super suit is very constricting. Then, the Larry-mobile passes by Fib again.

Later that evening, Junior and Fib are still out, but Laura, Percy, and Lenny confront him about his lies. When Junior tells a lie about aliens snatching these cows, swapping brains with the cows and the cows with the alien brains coming to earth and breaking the plate (which was literally the plot of the entire movie Percy and his little brother saw at the beginning of the story), Fib grows to be a massive giant with hands who has swapped out his friendly demeanor for a callous one and holds Junior captive and pretty soon, Fib starts causing misery and mayhem all over Bumblyburg by destroying stuff.

Back at the Larry-Cave, Larry is in the middle of a game of Candy Land with Alfred. Unfortunately for Larry, he has been stuck in the molasses swamp for 38 consecutive turns, while Alfred gets to see Princess Lolly. Larry pulls another card, but he is still stuck. He then sarcastically says, "I sure hope the rest of Bumblyburg is having a better day than I am." After looking outside of the window, Larry then sees the destruction, as does Alfred. Larry then tells his butler that he has got work to do and to consider their game... postponed. Alfred looks and agrees.

Back outside, Fib continues to wreak havoc upon the city. Junior does not understand why the creature who he thought was a friend is doing this to him. Turns out Fib reveals that that is the thing that happens with fibs: they grow! And now that Fib is big, it is his turn to call the shots. And now, Junior belongs to Fib instead of the other way around. Larry-Boy shows up to try to save the day. Percy comments that if anyone can stop Fib, Larry-Boy can. Larry-Boy commands Fib to drop Junior, but Fib taunts him. Soon, Larry-Boy pursues Fib via the Larry-Mobile as the Fib tries to escape by climbing to the top of the Bumblyburg Water Tower. It turns out that Alfred made some modifications to his vehicle. Alfred tells him to press the blue and green buttons, but those activate the wipers and horn, respectively. Alfred then reveals that it is the yellow button, and soon the Larry-Mobile is turned into the Larry-Plane and flies into the sky.

It turns out that the Larry-Plane is unarmed because Alfred did not bother making any weapons. Larry-Boy then ejects himself out of the plane. He tries to somehow tackle the Fib like a missile, but he is grabbed at the last second. Turns out, according to Alfred's calculations, Larry-Boy can do nothing to stop Fib. Alfred then makes a discovery. Although Larry-Boy can do nothing to stop the Fib, there is someone else who can. Fib later chooses to eat Larry-Boy because he "sort of looks like candy." Just when Larry-Boy is about to get eaten, Alfred's computer get unplugs and unfortunately for him, he does not know who can stop Fib. Fortunately, he plugs it back in, but he has to wait for it to reboot. Just when it seems like Larry-Boy is doomed, Alfred informs him that Junior is the only one who can stop the Fib. Junior soon realizes he has to tell the truth. He confesses to his parents and the entire crowd that he broke the plate. Fib spits out Larry-Boy, and as Junior confesses about the lies he told about Laura and Lenny, and also admitting that it was his fault, the Fib shrinks out of existence. Junior gets down from the water tower via Larry-Boy's other plunger ear and ate humble pie to his dad about the plate. Junior's dad forgives him, but he wishes that Junior had told him from the beginning. Junior thought that his dad would get pretty mad at him by telling the truth, but his dad tells Junior that he is worth more to him than some bowling plate. Junior then inquires if he should be punished, but his parents come to a consensus that he can skip the punishment, but only if he promises to tell them the truth from that point on. Officer Scooter then gets emotional and tries to thank Larry-Boy, but he has already left. We then see Larry-Boy making the missing piece of the Larry-Signal for dramatic purposes. Later that evening,we see a red version of Fib falling into Junior's neighborhood, looking for somebody else to help it grow....

Back on the Countertop, Bob congratulates Larry, now in his Larry-Boy costume, for doing a good job. Larry thanks Bob before saying that he has a meeting with the action figure people in 10 minutes. When Bob questions this, Larry says that "Larry-Boy mania is sweeping the nation. If you're not on board, you're gonna miss the train." Bob then says that they are over by Qwerty to talk about what they've learned today, before Qwerty once again plays the "What Have We Learned" song. Bob hops off to turn it off, but Larry uses his Super-Suction Ear to pull Bob back. After the song ends, Larry retracts his Super-Suction Ear again, and Bob then explains that Junior thought that the best way to get out of trouble was by telling a lie. Larry then adds that Junior had to keep lying to cover up the first lie until he was trapped, "A slave to his lies." Bob also adds that Junior thought that a lie would free him, but in the end, he had to tell the truth to set himself free. Qwerty then brings up the verse, which is "The truth will set you free. John 8:32b". Bob then explains to Ezzio that the only way for us to really be free is to do what God wants us to do. & God wants him to always tell the truth. Bob then explains that he is not saying that Ezzio won't get punished for whatever it is he did, but as Junior learned, facing your parents can be a lot less painful than getting stuck in a big lie. Larry then agrees, before telling Bob that they need to clear the stage because it is time for the premiere of his new music video. Larry then leaves & Bob is confused, and he asks Larry if he is joking. Bob then realizes that Larry is not joking and leaves while saying "Larry, we gotta talk!" We are then treated to a music video of The Larry-Boy Theme Song. Then, the episode ends.

Featured in the Larry-Boy Music Video

After the production for episodes two and three were done, Phil wanted to do a Tim Burton Batman parody episode. Originally, it was going to be Bat-Bob and the concept was that he tends to be serious. But he also wanted to add Larry as his sidekick, so he created a character named Larry-Boy, who attends to be the funny one. During Dave and the Giant Pickle, Larry role-played Larry-Boy and both fans and crew actually like the character so much, Phil decided to let Larry-Boy be the main hero. As a result, Bat-Bob never fell through, but Bob later became a hero named Thingamabob in The League of Incredible Vegetables, which came out fifteen years later.

Main article: Larry-Boy! and the Fib from Outer Space!/Home Video 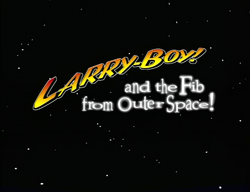