"I am that hero!"
— Larry-Boy's catchphrase

Larry-Boy (commonly structured as LarryBoy) is Larry's alter ego. He is a crime fighting superhero and defender of Bumblyburg.

He first appeared on Dave and the Giant Pickle when he wasn't feeling special. After hearing he can still play Larry-Boy and be himself, he plays around again, only to be stuck on the camera throughout the end credits until he gets unstuck and falls.

Understanding he can still pretend to be a superhero, LarryBoy made his first superhero film LarryBoy! And the Fib from Outer Space! in 1997, made another countertop appearance in the fifth segment of VeggieTown Values in 1998 and appeared again in LarryBoy and the Rumor Weed in 1999. LarryBoy appeared on one of the new countertop kitchen segments for Jonah: An Overboard Adventure!, and was the star of his own cartoon adventures, and did not appear again until LarryBoy and the Bad Apple (although was spotted at the end of Sheerluck Holmes and the Golden Ruler and appears in the "outtakes" of Jonah: A VeggieTales Movie). LarryBoy did appear in the Veggie Video "Bob Lends a Helping Hand," and afterward he returned in The League of Incredible Vegetables.

In For the Honor of LarryBoy, he rescues Ichabeezer from the supervillain Motato. In The Birthday Thief, he and Junior try to save everyone's birthdays from Motato. In Junior Jetpack, he got tied up by a robotic Rooney and his system was hacked, but fortunately, Junior, now known as Junior Jetpack, and Ichabeezer saved the day. In Monster Manners, he is trying to defeat a radish super-soldier named Randee, but he was defeated. Fortunately, Randee reformed and chased away Motato. In Jenna Chive Live!, he goes to stop Motato from writing a song with Jenna Chive, but she says that it's not going well, disappointing Motato.

In DUO Day, he and Junior Jetpack must work together to stop Motato and his plan to control everything in the House. In Starved for Attention, he tries to teach Junior Jetpack that they don't fight for glory and fame. In The Imposters, he and Bob stop Motato from stealing Bob's weather machine.

In The Missing Jetpack, he tries to rescue the jetpack-less Junior Jetpack from Motato. In Rise of Night Pony, he and Junior Jetpack show up to stop Motato only to notice that he was already foiled by a superhero named Night Pony. In Gone Lobster, he stops Motato and even accepts the job of taking care of Motato's lobster while he's in prison. In JimmyBoy, he tries to get back his superhero identity after Jimmy steals it. In The Big Secret, everyone celebrates LarryBoy's 100th capture of Motato and he becomes part of a League of Veggie Heroes.

In Shrink-abeezer, he tries to rescue Ichabeezer when he gets shrunk. In Larry Gets a Bulldozer, he saves the house when it was tipped over. In Leader of the Team, he and the League of Veggie Heroes must stop Motato from shooting mustaches at everyone. In The Good Samaricucumber, he listens as Pa Grape tells the story of the Good Samaritan and gets Takesaurus's action figure out of the grate with help from Mayor Archibald and Petunia. In Yambot, he and Ichabeezer stop a new supervillain named Yambot.

In LarryBoy and the Angry Eyebrows, he defeats Awful Alvin and his army of angry eyebrows. In Leggo My Ego!, he defeats the Alchemist and Mother Pearl and is insulted when he is called Pickle-Boy. In The Yodelnapper!, he defeats Greta Von Gruesome and her army of hula dolls while disguised as Noodle Blabberbop and rescues the yodelnapped yodelers. In The Good, the Bad, and the Eggly, he and Dark Crow defeated Awful Alvin, Lampy and Greta Von Gruesome.

In Fly By Might, he tries to get rid of a fly but fails miserably. In Cuke of All Trades!, he is forced to watch two stores. In A Polar Pickle!, he rescues a child's toy fish from a group of penguins. In Merry-Go-Wreck, he is forced to clean a bunch of erasers and heads to the amusement park and stops a commotion caused by Electro-Melon and Lemon Twist and urges the two to work together to fix it.

The inspiration for Larry-Boy came when Big Idea was thinking about doing an episode that spoofs Batman after they had spoofed both Gilligan's Island and Star Trek for the second and third episodes. The initial idea was to make Bob the superhero under the name Bat-Bob. Phil Vischer even had an idea of a teaser scene to show people what the idea would look like: Bat-Bob stands on a roof top in a mask and has along cape behind him and he would strike the pose, "I'm Bat-Bob!" Then the wind would pick up and his cape would fly off of him and fly away with Bob chasing it and he'd be on the edge and he's look down at the street and ask pedestrians for help. Then Vischer thought that Larry would be his sidekick under the name Larry-Boy. The personality for Larry-Boy was just going to be the normal personality of Larry just in a costume. 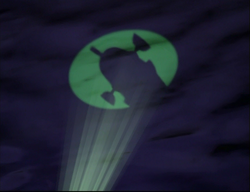