Start a Wiki
Larry's Lagoon is the second segment of God Wants Me to Forgive Them!?! and a parody of Gilligan's Island.

One day, the two friends had three guests booked for a three-hour tour. There was a professor (Dad Asparagus), a millionaire (Archibald Asparagus), and his wife. There was going to be a movie star and some other girl, but they cancelled. After they do an introduction dance for their guests, Bob and Larry begin their tour. As they are out at sea, Bob asks Larry if he can take the wheel while he checks on the guests. As Larry takes the wheel, he begins to daydream of being a Russian ice breaking captain by the name of Larry Romanov. He imagines that there are two great whales stuck in ice and his only way of saving them are smashing through an iceberg. Suddenly, Bob breaks the daydreaming by asking Larry if he wants a snow cone. Suddenly, Larry rams the boat into a rock thinking it's an iceberg.

As everyone is launched from the boat and onto a nearby tropical island, everyone begins to become upset with Larry and ask him why he would smash the boat. Larry states he did so because of his daydream. Soon, the boat sinks, leaving everyone with no means transportation and causing the crew to hold a grudge. Later that night, everyone makes bamboo huts as living quarters. As Larry lies in his hammock at night, he tells Bob that life on the island isn't so bad. Bob very grumpily tells Larry that everyone is stuck on the island with no way home. Larry asks for Bob's forgiveness, but Bob says it's not good enough. Angered and hurt with everyone, Larry leaves the campsite and finds a way off the island.

The next morning, everyone wakes up to find no sight of Larry. Soon, the professor comes back with a catapult that will supposedly fling everyone back home. He demonstrates by using a coconut. He flings the coconut which hits Bob, who is on a palm tree looking for Larry, and makes him fall into the millionaire's hut. Bob is grumpy for the professor's catapult while the millionaire is grumpy with Bob for destroying his hut. The professor asks Bob for forgiveness while Bob asks for the millionaire's forgiveness. Both men forgive each other, but they soon remember that Larry asked for forgiveness about the boat but they wouldn't do so.

Realizing that they've let Larry down, the gang head out through the entire island to search for Larry. As they find him on the other side of the island, they see Larry has made a small raft and is trying to head back home by himself. They say they're sorry which makes him come back to shore. They also ask forgiveness for not forgiving him. Larry forgives the gang and suddenly a voice echoes out. The voice belongs to a palm tree named Palmy and he begins to sing a song about forgiveness. Suddenly, the professor comes around with a helicopter he invented. Everyone climbs up the helicopter's ladder and they all fly home. Larry tells Bob that next summer that they will sell lemonade like everyone else. 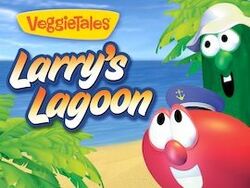 Retrieved from "https://bigidea.fandom.com/wiki/Larry%27s_Lagoon?oldid=165932"
Community content is available under CC-BY-SA unless otherwise noted.