Larry expresses about his top hat and box of chocolates while waiting for the trolley.

Announcer: And now it's time for "Silly Songs with Larry", the part of the show...

Archibald: And now it is time for Classy Songs with Larry, the part of the show where Larry comes out and sings a classy song.

One day, while he was waiting for the trolley, he had a hat

Archibald: He wore it high upon his head so proudly, a beautiful hat.

Archibald: A hat like this just makes him feel so grandly.

Now fancy this and fancy that.

The splendor of his hat in all its majesty.

I feel so swell and handsome in my hat. I bet that others wish they had in fact -

Larry and Archibald: A hat as this a hat as that, a hat so fine, a high silk hat!

Archibald: Now his hat was not all he wore so proudly, I must in fact share more than that. For upon his lap there sat a treat so fondly, of chocolate this -

Larry: And chocolate that.

Archibald: Deliciousness that makes him feel so dandy, a chocolate bliss.

Chorus: Confections such as these are more than candy, somewhat like life, a box of that.

Larry: I have my chocolate placed upon my lap. I feel so good you just cannot top that. I have my snack, a chocolate pack of chocolate this and chocolate that! Oh golly, Mr. Nezzer, now whaddya think of that?

Archibald: Now time was passing and the sun grew hotter upon his hat -

Archibald: So beneath his hat he thought and pondered:

Larry: What should I do to save my hat?

Archibald: He thought and contemplated as he perspired, beneath his hat -

Chorus: Upon his snack.

Archibald: He feared his chocolate treats would soon retire into a pool.

Larry: I won't feel grand if I take off my hat. The sun's getting hot and my hat just might go flat. My hat, it might go flat, and my sweets will melt like that! Oh, hurry Mr. Trolly, before my dapperness goes flat.

Archibald: He decided to forgo his looks so dashing to save his hat -

Archibald: So he placed the treats upon the seat beside him -

Mr. Nezzer: And put his hat on top of that.

Larry: Don't anybody sit close to me, upon my hat. I ask if all of you could be so kindly and just stand back, away from my snack!

Larry: A great big squash just sat upon my hat

Oh, tell me, anybody now whaddya think of that?

All: A great big squash just sat upon his hat

He squashed his hat, he made it flat, he squished his snack, oh what of that

(The trolly arrives and all get on except Larry. Scallion #1 walks up.)

Scallion #1: They've never given me a name. I've been around since show one and I still don't have a name!

Larry: Now whaddya think of that? 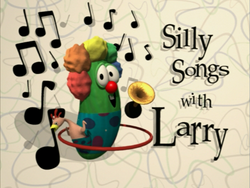 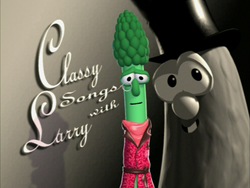 Retrieved from "https://bigidea.fandom.com/wiki/Larry%27s_High_Silk_Hat?oldid=205976"
Community content is available under CC-BY-SA unless otherwise noted.