"I'm a cucumber!"
— Larry when being called a pickle

Larry the Cucumber is the deuteragonist and silly co-host of VeggieTales. He hosts the show alongside his best friend, Bob.

Whether he's singing a silly song, fighting crime as a superhero, or just helping his friends, Larry is truly an essential member of the VeggieTales crew and never fails to be a crowd pleaser.

Larry made his first on-screen debut in a 1992 VeggieTales screen test aptly called Mr. Cuke's Screen Test, where he pops out from a ceramic bowl on the kitchen countertop and hops towards the camera and smiles at the viewer.

Later that year, an additional screen test was made entitled, VeggieTales Promo: Take 38. Here, Larry is searching for his blue, plastic wind-up lobster, unintentionally interrupting Bob the Tomato throughout the short as he gives a speech to do a show pitch of VeggieTales for potential investors.

Eventually, in 1993, Larry made his big debut in VeggieTales, co-hosting alongside Bob. Since then, Larry has gone on to become an integral part of the VeggieTales family, gaining fame and notoriety for his many performances in character roles and personas such as Daniel of Daniel and the Lion's Den, Little Joe in The Ballad of Little Joe, the strapping adventurer Minnesota Cuke, the first mate of the Pirates Who Don't Do Anything, a member of the band Boyz in the Sink, and of course, his superhero alter-ego, Larry-Boy.

Above all, Larry is probably most famous for starring and singing in his own segment on the series: Silly Songs with Larry (much to the chagrin of Archibald Asparagus). With this segment, Larry has gone on to sing about all sorts of silly and bizarre things, such as a water buffalo, a hairbrush, lips, a yodeling veterinarian, SUVs, pants, a soap opera starring manatees, and many, many more.

According to Larry's official bio — if he weren't an actor, he would've been the world champion at Candy Land or be clerking in the Supreme Court.

Larry is kind and loyal, always willing to help a friend in need and make others happy. Despite these traits, Larry is a little scatterbrained at times and can get distracted by his own thoughts and ideas. This often leads to Larry doing what he's not supposed to do or making a few mistakes. However, Larry is generally resilient when he has to face a problem and is able to work through his struggles with the help and support from his friends, especially Bob.

Larry is quite silly too, which is a trait fed by his absentmindedness and his creative mind. This often leads to outrageous and bizarre ideas, most of which end up being written into songs for Silly Songs with Larry. Sometimes though, Larry goes a little overboard with the silliness and can get himself into trouble with others such as Bob or Archibald. Larry doesn’t stay in trouble for long though, as he's usually able to cooperate and compromise to get a result that everyone can be happy with.

Larry is also very child-like. He holds a very innocent and simple perspective on life that impacts almost everything he does. However, Larry does have a mature side, which comes out whenever he needs to take something seriously, such as rescuing someone or explaining the moral of a story.

All-in-all, Larry is a true friend to everyone he meets, and never ceases to come up with new and exciting ideas to share with others.

Larry is a green cucumber with a singular buck tooth. He is not very tall and thin like average cucumbers, which gets him mistaken for a pickle a lot. His skin is fairly bumpy with many striations. He has two egg-shaped eyes that are very close together with black pupils, and a perfectly round nose that is a slightly lighter shade of green than his skin. His eyelids are the same shade of green as his nose. Initially, Larry's skin was a much darker green like a regular cucumber, but around the 2000's, his skin gradually grew lighter and more vibrant in color.

In LarryBoy: The Cartoon Adventures, Larry was depicted as himself and as LarryBoy. Here, however, his appearance reflected the show's 2-D cartoon style. The biggest change for Larry was that his body was slimmed down significantly, now tapering down from his head to his lower half to make him look like he was puffing out his chest heroically. Larry also began to wear a tan Janitorial outfit when he had to assume his role as an undercover janitor at the Daily Bumble to get the latest scoop on the news of Bumblyburg. Alternatively, he also wore a black and gray sweater whenever he was off-duty as a superhero or janitor.

In VeggieTales in the House and in the City, Larry was completely redesigned along with the rest of the VeggieTales cast. For these series, he gained amber irises and thin, black eyebrows. Larry’s skin also changed to a very bright green, with streaks of dark green and yellow-green along the bottom half of his body. His tooth also changed shape to looking more trapezoidal. His nose is also slightly larger than before. 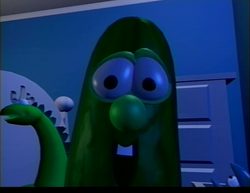