King George and the Ducky

"You have been selfish, King George. And when we are selfish, we hurt the people around us... Just as you have hurt Thomas."
— Melvin telling King George what he has done

King George and the Ducky is the thirteenth episode of VeggieTales.

This story is a retelling of David and Bathsheba from the Book of II Samuel.

The show opens up on the countertop with Jimmy and Jerry Gourd, who are disguised poorly as Bob and Larry. They say they've received a letter from a guy named Jimmy who lives somewhere near Texas. He mentions a friend of his named Jerry who is very selfish. Jerry (dressed as Larry) speaks up and says that Jerry is a very nice guy and the guy who is really selfish is called Hubert. Jimmy (dressed as Bob) is annoyed with Jerry for messing up the letter. Jerry takes off his Larry costume and lashes out at Jimmy. All of a sudden, the real Bob and Larry appear and confront Jimmy and Jerry. Jimmy and Jerry say they figured Bob could use a break and they've wanted to host a show ever since Dave and the Giant Pickle. Bob at first isn't sure about letting the gourds host it at first, but he lets them when they say that they have a story to tell. The story they have is a poorly acted play called "The Englishman Who Went Up a Hill (and Came Down with All the Bananas)."

After the story ends, Jimmy and Jerry head towards Qwerty for a verse, only to find that he is completely shut off. As Jimmy tries to figure out a way to turn him back on, Jerry shows a piece of cardboard with "Don't be selfish" (which obviously isn't a real verse from the Bible) scribbled on instead. As the gourds attempt to wrap up the show, a fed up Bob comes out and discredits Jimmy and Jerry for their performance, plus he scolds them with their results. Bob hops over to the camera and apologizes to all of the boys and girls in the audience for the abnormal activity, saying that they will certainly try doing the show again, and he asks Larry if he remembers about a letter from a little girl named Lucy Thomas who hails from the city of Bismarck, in the state of North Dakota. Larry says that he does and it turns out little Lucy wrote to Bob & Larry because she did not wish to share any of her toys with her little sister. The two then begin to play the story of "King George and the Ducky."

King George and the Ducky

In the story, there lives a king named George (Larry) who resides in a very big castle on a mountain. While his kingdom is in the middle of a pie war, all he ever does is spend time in his bathtub and play with his rubber ducky. King George's assistant Louis (Bob) always urges him to stop fooling around and start taking part in leading his troops in the epic pie war, but George always ignores Louis and focuses on him and his rubber ducky collection. One day, as George looks over his kingdom, he notices a poor peasant boy named Thomas (Junior Asparagus) bathing outside and playing with his own rubber duck. Filled with envy, King George's focus is all on Thomas' duck and will do stop at nothing to get the duck. Just then, Cedric (Scallion #1), King George's top general of his army, comes by to inform George that the war has grown ferocious and that his army is desperate need of more soldiers. Seeing this as an opportunity to snatch Thomas' ducky, King George says that Thomas will be willing to enlist and to send him to the front line alone. George and Louis begin to prepare for taking the ducky.

Later that night, King George and Louis head out to the village to take the duck. They take the duck from Thomas' house and head back to the castle. George puts the ducky on a pedestal and claims that it is, “the most perfect ducky the world has ever known.” Louis points out that it is literally no different than George's other duckies, but George ignores him. Just then, Cedric comes in with Thomas, who has won the battle all by himself but is suffering terrible PTSD from the battle. While Louis feels awful for allowing this to happen, King George doesn't feel any remorse and focuses on the duck. Louis snaps at George for being selfish and always focusing on what the only thing he cares about: himself and for being a terrible king in general. Just then, Melvin, (Pa Grape) a storyteller, comes in and tells a parable about a rich man who has a lot of sheep and a poor man who has only one sheep which he loves very deeply. When the rich man is visited by the guest, he goes to the poor man and steals his sheep to serve as dinner to his guest. Demanding who the horrible rich man is, Melvin points out that the rich man is King George himself. Melvin tells George that "whether you're a king or just a kid, God wants us all to think of the people around us, not ourselves." King George then brings Thomas back to his castle, gives him a toasty hot bath in his tub to cure his PTSD, apologize, and give back his duck to make up for his sins. King George, Louis, Melvin, and Thomas then sing a song about how it is always right about putting people first.

Countertop Outro and What Have We Learned

Back on the countertop, the gourds sing the song. After, Bob tells Larry that the very next day, King George went out giving away all his old duckies to his people the next day to start his new life of being a good king. The Bible verse of the day is Romans 12:10; "Be devoted to one another in brotherly love. Honor one another above yourselves." Bob informs the viewers that instead of honoring ourselves or making ourselves happy, we should think about the people around us, such as our friends, family, and neighbors. Bob also tells little Lucy of Bismark that she really should consider sharing all of her toys with her little sister. The show ends with the French Peas, who are dressed as Bob and Larry, coming out and asking if they can host a show of their own. 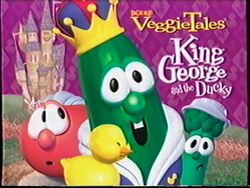