The episode starts when Bob reads a letter from a little girl who is afraid because their might be monsters in her closet. 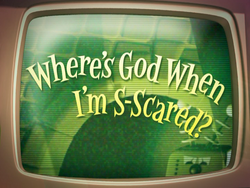 Retrieved from "https://bigidea.fandom.com/wiki/Where%27s_God_When_I%27m_S-Scared%3F?oldid=8405"
Community content is available under CC-BY-SA unless otherwise noted.