Junior Asparagus, or simply known as Junior, is the tritagonist of VeggieTales franchise.

He is a young and curious boy, often getting himself into mischief. But at the end of the day, all Junior wants is to do what’s right and prove that little guys can do big things!

Junior made his first onscreen debut in VeggieTales' first show Where's God When I'm S-Scared?. He stars in the show's first segment, Tales From the Crisper, where he stays up late to watch a scary movie about the fearsome Frankencelery. Junior ultimately gets scared and has trouble falling asleep, only to be visited by Bob the Tomato and Larry the Cucumber as they teach him that God is bigger than all his fears and has nothing to be afraid of.

Since then, Junior has gone on to appear in many VeggieTales shows, often portraying himself among a vast list of titular character roles. Such roles include the biblical David in Dave and the Giant Pickle, the benevolent Lyle in Lyle the Kindly Viking, Riccochet in The League of Incredible Vegetables, and the wooden toy Pistachio in the show of the same name.

Junior lives in a suburban home with his mother and father, Lisa and Mike Asparagus, respectively. He is very close to his parents, especially his father. Junior loves spending time with them and is always willing to listen and learn from them.

Junior is best friends with Laura Carrot and good friends with Annie Onion and Percy Pea. Later series depict him making even more friends, including Callie Flower and Gary Garlic. Junior is also very close with Bob, Larry and the rest of the VeggieTales cast. At one point, Junior had a negative relationship with a bully named Gourdon. Junior eventually stood up for himself and even tried to befriend the bully, but Gourdon gave up, realizing he couldn’t bother Junior anymore and started leaving him alone.

According to his official bio — if he weren't an actor, Junior would've been an aerospace major at Veggie Valley Grade School.

Junior can be described as curious, courteous, and naive. He's always eager to try new things and learn something along the way. Junior ultimately functions as the surrogate child to any children watching the show(s). Like most kids, Junior faces many challenges that are crucial to a child's mental and emotional development, like learning how to forgive, dealing with bullies, and learning how to treat others with love and respect. Nevertheless, he's a fun, caring and lovable kid.

Junior is a green little asparagus. He has large child-like eyes and a tiny green nose. He has a small green spear atop his head, which is usually covered by a yellow baseball cap with a red brim. In later appearances, he intermittently starts to wear a tan and red striped polo shirt. Junior often smiles and speaks out of the side of his mouth, especially when he's feeling or acting sheepish.

When Junior made the jump from 3D to 2D animation while appearing in LarryBoy: The Cartoon Adventures, he gained a more simplified and cartoony design based on his 3D counterpart. To reflect his new role as a grade-school reporter for The Daily Bumble, Junior starts wearing a yellow sweater and loses his baseball cap for a large gray fedora with a press pass lodged into the hatband. He also carries around a camera to be ready to take pictures of anything newsworthy.

During the run of VeggieTales in the House and in the City, Junior was given a major redesign like the rest of the VeggieTales cast. For these series, Junior was given amber irises and small black eyebrows. He also stoped wearing his cap, now sporting a new spear that is stylized to look more like spikey hair.

For The VeggieTales Show, Junior reverted back to his original design. The only difference, however, is he stops wearing his yellow cap. 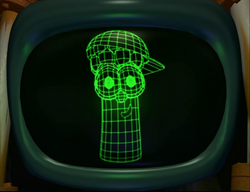