Junior's Playtime Songs is an album in the VeggieTales Sing-Along series that was released in 2004. 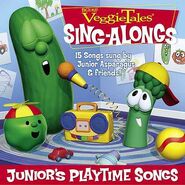