"Hello! My name is Joshua, and God has given us this land!"
— Joshua giving his victory speech towards the people of Jericho

Josh and the Big Wall! is the ninth episode of VeggieTales. This episode is a retelling of the Bible story of Joshua and the Battle of Jericho.

The opening countertop finds Bob on his usual spot introducing himself. But then, we see Junior Asparagus on Larry's spot introducing himself. Bob then says that he bets the kids are wondering where on earth Larry is, with Junior looking sheepishly at the camera.Bob then explains to the kids that the reason Larry isn't in today is because he was a little tired after the events of the last show, so they decided to let Larry sleep in. Bob then reassures the kids that Larry will be in pretty soon. But, in the meantime, Junior Asparagus has very graciously agreed to help Bob out. Junior then breaks the fourth wall by saying hi to all of the kids watching them at home. Junior is then informed by Bob that today they have received a hand written letter from this random kid by the name of Victor Bartholomew who hails from the city of Sausalito, in the state of California. Junior then breaks the fourth wall once again by saying "Oh. Hi, Victor". Victor explains that he's got bit of a problem on his hands. He says that there was some random kid named Louis in his class who decided to hit him the other day & in church, Victor just learned that God wants us to be nice to other people; even if they are not so nice towards us. But Victor doesn't feel like doing that because deep down inside, he really wants to hit Louis back. Now, Victor wants to know from Bob & Junior if he should follow God's way: which is to be nice to him or should he do it his way: which is to hit him back. Junior sympathises with Victor because sometimes he wants to do things his way too and that the stuff he has learned in church doesn't sound like much fun at all. Junior asks Bob if they have any stories about this kind of stuff. Bob then tells Junior about the Israelites and how even though they sometimes obeyed God's directions, they didn't always do what he asked. Bob then tells Junior to start using his imagination, which we then see Bob and Junior being transported from the kitchen to the Holy Land.

Bob acts as narrator and provides Junior with some background information. The Israelites, having been held as slaves in Egypt, are liberated by Moses and led to the Promised Land. However, they flee after seeing Goliath and his family in it and are banished from The Promised Land for forty years. Upon the completion of their exile, Moses has passed away, and Joshua (played here by Larry) has become leader of the Israelites. Joshua leads them back to the Promised Land, but one thing stands in their way — Jericho.

The story is interrupted here by Silly Songs with Larry. "Song of the Cebu," introduced as a "sequential image, stereophonic, multimedia event," finds Larry on the counter-top with a slide projector and a captive audience comprising of the gourds and Junior Asparagus. The song, about a boy and three cebu (and a hippo) frequently goes off track and is interrupted twice by Archibald Asparagus.

When the story resumes, the Israelites are met by the defenders of Jericho (the French Peas) who taunt them from atop the city's great wall. Joshua explains that God has given this land to the Israelites and that therefore the defenders will have to step aside. They are met by more insults and jeering. When a slushy falls and hits Jimmy, they fall back and regroup.

That night Joshua meets the Commander of the Army of the Lord who tells him how the Israelites are to take Jericho: they must march around the city once a day for six days; on the seventh day they are to march around it seven times, blow their horns, and all yell at the same time. At this point, the messenger states, the walls of Jericho will eventually fall. Naturally this plan leads to some skepticism. Joshua must deal with dissent among his people, some of whom want to return to Egypt and some of whom want to attack the wall with might.

But they agree to try it God's way and proceed to Jericho the next day. The city's defenders insult them all the more, turning their taunts into a choreographed musical number while bombing them constantly with slushies. The end of the day finds the Israelites on the verge of rebellion. At this point, Junior intervenes and convinces them to continue with the plan God laid out. He explains that God's way doesn't always make sense, but provides examples of how it always works out in the end.

The Israelites agree to stick with the plan and, in spite of renewed counter-attacks, march around the city for seven days as specified. On the seventh day they blow their horns and scream. At first nothing happens, but then cracks appear and the walls crashes down, just as God said it would, and Joshua claims the land for his people.

Bob and Junior wrap up the show on the counter-top by doing the main things he and Larry usually do: Standing over by Qwerty and trying to talk about what they've learned today; only to get interrupted by the What Have We Learned song, recapping the lesson from the film, getting a verse from Qwerty(in this case, it is a part of 2nd Samuel 22:31), and telling the kid in question how on earth he/she can solve the problem he/she is having! (in this case, telling Victor that he should probably be a lamb & obviously do things God's way & that maybe Louis just needs a buddy & not a punch to the nose.) Bob & Junior then tell the kids that they're out of time for today but to always remember that "God made them special & He loves them very much". Then they say their farewells to all of the kids watching at home and exit the counter-top. But as soon as Bob and Junior leave the countertop, Larry appears in his pajamas and night hat, yawning for a bit, and asks if it is time for the show. Seconds later, the lights go out & QWERTY's screen turns off leaving only Larry's eyes in the dark. Larry then remarks by saying "Aw nuts." 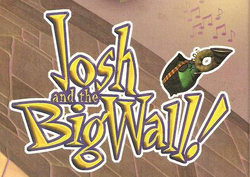 Retrieved from "https://bigidea.fandom.com/wiki/Josh_and_the_Big_Wall!?oldid=216786"
Community content is available under CC-BY-SA unless otherwise noted.