"We're making a movie about Jonah, the incredible story of a man who swallowed a whale!"
— Larry

Jonah Sing-Along Songs and More! is the 17th episode of VeggieTales and the 4th sing-along video. This video was released prior to Jonah: A VeggieTales Movie, and was made to promote the then-upcoming movie.

Bob and Larry welcomes the viewers to Jonah Sing-Along Songs and More and announces about their first big movie. They want to bring Archibald out to tell everyone about his staring role as Jonah, but he's afraid to come out of his dressing room due to the fear of being swallowed by a whale, so Bob tells him that before Jonah was swallowed by a whale, he was a famous prophet who brought God's message to his people.

After Message From The Lord, Bob compliments Archie and tries to get him out of his dressing room, but Archie claims he's busy and that he's in the bathtub practicing for the big storm scene, to Bob's confusion and Larry's jealousy. Larry expresses his jealousy towards Bob before Bob tells to let go of his anger, to which he does and decides to raid the fridge for cheese curls and root beer, to Bob's confusion. Larry explains it's the favorite food of The Pirates Who Don't Do Anything and that they're the stars of the movie.

After their song, Larry tells Archie if he comes out, he has a surprise for him: his giant super-jumbo movie popcorn. Archie asks if he put butter on there, and Larry goes to do so, but gets it on himself instead, making Archie declare the deal off. Larry then says to Bob that it's time to roll the next song.

After the Lyle Medley, Larry tries to get Archibald out of his dressing room, but Archibald refuses. So Larry imitates a chicken to Bob and Archie's annoyances, causing Bob to turn off the lights which made Larry scared. Bob claims they blew a fuse on the movie set. Larry then expresses his fear of the dark. Bob then tells him if he knew what it was like to be in a belly of the whale, he'd be compassionate towards Archie and reminds him that Jonah was in the whale for three days and cues the next song.

After Belly of the Whale, Larry decides to show Bob his priceless memories from VeggieTales: a piece of chewing gum from Esther... The Girl Who Became Queen, the first Larry-Boy helmet from Larry-Boy! and the Fib from Outer Space!, and a partially-eaten donut from Dave and the Giant Pickle. Suddenly, Bob bumps into the Larry-Boy helmet, causing one of its plungers to hit the donut, catapulting it on the ground for the Larry-Boy helmet to smoosh it. Larry then states it's $77,000,000, since it's rare. Bob objects and tells Larry to show mercy. When asked how much, Bob says that mercy is free and that we should show mercy to others since God shows mercy to us. At this, Larry follows Bob's advice. Bob then asks Larry to help him get Archibald out of his dresing room. Larry agrees, but asks Bob to help him get the jelly off the floor.

After Billy Joe McGuffrey, Larry offers to help Archibald by giving him courage. Bob suggests he slips some under the door, but Larry has a better idea: to inspire him with courageous heroes from the silver screen. First, he tries to be like Indiana Jones calling himself Indiana Larry, but that doesn't work. Then he tries to be like James Bond penning himself Larry Bond, but it doesn't work either. Finally he comes out as LarryBoy, but that doesn't work. Bob comes out and comforts him, saying real courage doesn't come from watching movie heroes, but from believing God.

After Second Chances, Larry comes out in a scuba outfit and states that since Archibald won't come out of his dressing room, they're going to take matters into their own hands. When questioned, Larry states that they'll pick someone else to play Jonah: Larry, because Jonah spent a lot of time in the water. Bob gets worried, but Larry tells him he's got his speech for the Academy Awards and makes up a speech. Bob cuts him off and tells him that he forgot something Jonah discovered; that it's important to praise God. Larry tries to defend himself, but discovers that Archibald is out of his dressing room. Archibald comes out and Bob asks he he's gonna be Jonah after all to which he agrees because he doesn't want Larry to do it. Bob is then glad that Archie's back, but Larry wonders if pirates win awards for supporting actors. Bob tells him and the viewers that they'll find out, and Larry says what'll be like to be whale chow, much to Bob and Archie's confusions ending the episode. 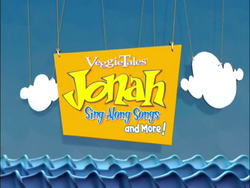