Jimmy and Jerry Gourd are brothers and two of the main characters of VeggieTales.

Jimmy and Jerry first worked at the USS Applepies with Bob, Larry, and Scooter. Scooter didn't like them at first because all they do is sing and eat, and thought they were crazy. Junior then met them and after hearing Jimmy say he'd like to eat a whole planet, he told the crew to send the brother gourds in the space pods so they could eat the popcorn meteor and save the ship. They were then congratulated and Jerry found the electric plug for the ship's power and everybody was happy of what they did.

They also took over the Countertop when they wanted to host the show, which unfortunately didn't go well as expected.

Bob and Larry are like Abbot and Costello, Jimmy and Jerry are like Tweedle-dee and Tweedledum. They like eating and singing a lot. They don't do a whole lot, but they do like helping others when they're needed.

Jimmy is considered the more brash and talkative one. It has also been shown that he has a short temper. Jerry is quieter and arguably slightly more intelligent than his brother. He is often shown repeating some phrases from his brother.

Both Jimmy and Jerry are gourds. Jimmy is short and orange, and has a low voice, while Jerry is tall and yellow, and has a high voice that is somewhat similar to Larry's, but it is slightly more monotone. 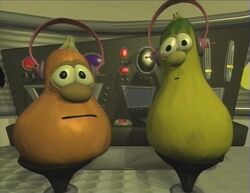