Jason T. Conrad is a seven-year-old boy who is a member of the Rockhopper crew from the Federation.

Jason lives with his parents and twin sister Michelle. He was planning to go to Space Camp, but had to go to his Grandmum's for the summer when their parents are going on a business trip.

Jason is smart and clever, and has a good sense of humor, but sometimes he can be selfish and bratty, too. He'd much rather be someplace else, but decides to make the best of things. He finds fun things to do, and has fantastic adventures with Zidgel and the entire Penguins crew!

Jason Conrad is a young boy (around 7 years old) with short brown hair and black dot eyes. He wears a green and white t-shirt with khaki shorts and red sneakers.

Jason Conrad appeared in every episode of 3-2-1 Penguins! 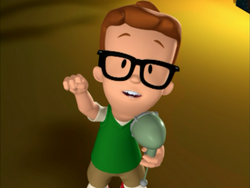 Retrieved from "https://bigidea.fandom.com/wiki/Jason_Conrad?oldid=199008"
Community content is available under CC-BY-SA unless otherwise noted.