It's a Meaningful Life

It's a Meaningful Life is the thirty-ninth episode of VeggieTales.

The show starts out with Bob the Tomato and Larry the Cucumber on the countertop as usual. Bob hadn't planned anything because he was expecting Larry to interfere with the show as usual. Feeling insulted, Larry decides to keep his mouth shut, even though Bob tries to reason with him. Bob then turns to QWERTY who posts up an email from a girl named Maggie Greenman from Dentenial, Texas. She explains to Bob & Larry that she really wanted to get on the cheerleading team, but she didn't get picked. Even though he wasn't talking, Larry helped Bob with the situation by showing her a film.

The story takes place in a town called Rockwell, where Stewart (Larry) aims to win a football game so he can go to the Salad Bowl. But after a mistake from the Decoy, Morty (Mr. Lunt), Stewart finds himself in the hospital. Now, not only is unable to go to the Salad Bowl, but he can never play football again. Morty, however, did and became famous. To try and cheer Stewart up, his dad (Mr. Nezzer) gives him a job at his toy train factory.

Fifteen years later, Stewart is still living in Rockwell and is now the CEO of the toy factory. Unfortunately, the factory is behind with the bills and need to make 10,000 trains by Christmas. Stewart is now married to Donna (Petunia Rhubarb), has two sons, Art and Barney, and an adopted daughter named Emma. He also coaches his sons' football team and comforts Emma when she didn't get the part as a camel in the school Christmas play.

But Stewart's problems get worse when Morty comes back home and plans to buy the toy train factory. Stewart tries to make the factory to work harder, but that only made things worse. Now he's really starting to regret missing that football in the game. But just then, a train appears out of nowhere.

Stewart boards the train and starts to explore it. He then discovers the conductor, Gabe, who offers Stewart a chance to see what life would of been like if he had caught that football in three stops. The first stop showed Stewart as a greedy business man who plans to buy the Toy Factory and rename Rockwell just like Morty did. The second stop showed Rockwell without Stewart around. Donna never got married, the football team players that Stewart coaches became mean spirited boys, his 2 sons Art and Barney do not exsist because they were never born, and Emma was still in the orphanage because Stewart never adopted her at all.

At the third stop, Stewart was given a choice to either remain in the world where he is famous, or to return home to solve his problems. Stewart decided that he should probably go home, seeing that God's plan for him in Rockwell is better than being famous.

When Stewart got back to the toy factory, he found that everyone in Rockwell was helping him get back on track. Even Morty began to see that no one would help him unless he lives a meaningful life too.

At the end of the story, Bob and Larry make up while Maggie learns to be happy because God has something special planned for her. 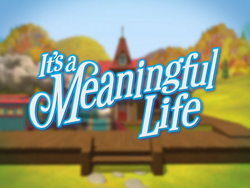