"His Cheeseburger" is the eighth Silly Song and Mr. Lunt's first song. It debuted in the episode "Madame Blueberry". It is about Jerry trying to order a cheeseburger.

(title card appears; it is the same as the original but without the music stand and Larry is wearing a raccoon hat and is caught in a bear trap; music starts playing banjo)

Announcer: And now it's time for Silly Songs with Larry, the part of the show where Larry comes out and sings a silly song.

(Larry is about to sing a song about him being stuck in a bear trap, with a cardboard nighttime park background)

Archibald: (offscreen) Just a moment! Wait, stop talking! (music stops, and Archibald Asparagus shows up with a piece of paper) Excuse me, I have an announcement! (clears throat, and reads out the paper) "Because of the high standards we on this show strive to adhere to, and as a result of the disastrous outcome of the previous silly song, management has decided to review compositions from other performers for this segment. Several songs were screened and we chose one based on the applicant's sense of artistry and all-around propriety." Thank you. (puts down the paper and dashes off)

Larry: So what are you saying?

Larry: (looks behind on the bear trap) Oh, yeah?! Well, then how am I supposed to get out of this bear trap?

Archibald: (offscreen) I'm sure you'll figure something out.

(pea worker shows up and pulls out the new title card; it shows Mr. Lunt without his hat in a red robe and dark hair; the background is pink with the title "Love Songs with Mr. Lunt")

Announcer: (clears throat) And now it's time for Love Songs with Mr. Lunt, the part of the show where Mr. Lunt comes out and sings a love song.

(another pea worker pushes the title card away; the evening background is kept, but this time at a fast food restaurant called "Burger Bell"; Jerry's car stops at the drive-thru and Mr. Lunt starts the song)

He said, " I am extremely hungry, but I guess I can wait until then."

Mr. Lunt: He stayed at the drive-thru till sunrise. He may have dozed off once or twice.

When he spotted a billboard for Denny's, bacon and eggs for half price.

How could he resist such an offer? He really needed something to munch.

Cheeseburger please do not get angry, he'll eat and be back here for lunch.

Cuz he loves you cheeseburger with all his heart.

And there ain't nothin' gonna tear you two apart.

And if the world suddenly ran out of cheese,

he would get down on his hands and knees

to see if someone accidentally dropped some cheese in the dirt. And he would wash it off for you, wipe it off for you, clean that dirty cheese off just for you!!! You are his cheeseburger.

Archibald: (offscreen) I thought you were going to sing about growing up in Connecticut! (as he says this, the title card gets bushed back onto the screen)

Announcer: This has been Love Songs with Mr. Lunt. Tune in next time to hear Mr. Lunt say...

Mr. Lunt: I grew up in New Jersey.

Mike Nawrocki originally had the idea of a song called "Drive-Thru Girl", which was about Larry trying to hit on a girl from the drive-thru. He later put Mr. Lunt in the position as he didn't feel it sounded like Larry, but later discovered it as a bit creepy. He assumed it'd be funnier if it was about cheeseburgers, and added Jerry in with Mr. Lunt singing. He and Kurt got inspiration from listening to albums by Meat Loaf and Air Supply. Kurt stated in The End of Silliness commentary that Mike slightly copied a verse from a Spanish soap opera he used to watch. 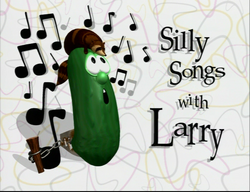 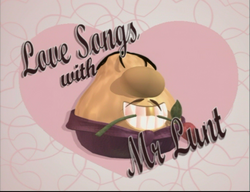 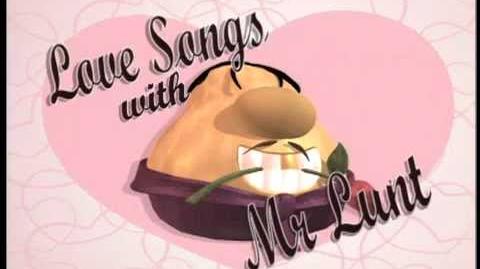 VeggieTales His Cheeseburger - Silly Song
Add a photo to this gallery
Retrieved from "https://bigidea.fandom.com/wiki/His_Cheeseburger?oldid=210522"
Community content is available under CC-BY-SA unless otherwise noted.