Herbert and Wally are best friends who live in Bumblyburg. Similar to Jimmy and Jerry Gourd, they love eating.

In the first episode, the two disguise as "The Cheese Breathing Cow Dragon" to get free picnic food. Larryboy stops them and Officer Olaf takes them away. They are not seen in this episode after this.

Herbert and Wally are seen friendly, but their eating habits sometimes get them in trouble.

Herbert is a tall purple eggplant with a large nose and blonde hair. He sports a yellow sweater and a green cap.

Wally is a small purple eggplant with indigo hair. He sports a gray tanktop with an opened red flower shirt, khaki pants with a black belt, and half moon glasses. 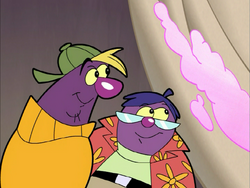