Happy Together! is a special VeggieTales compilation DVD. All feature stories about happiness.

Mr. Lunt is making a Hap-umentray, and he needs Larry's help. But Larry is down because he lost his giant teddy bear Chestnut on a bus, and he feels like he can't be happy anymore after what happened. Lunt suggests Larry to help him out interviewing the kids and he'll probably feel better. They interview the kids about "how do friends make you happy?".

Song #1: Dance of the Cucumber (from Rack, Shack and Benny)

After interviewing them, Larry still feels down and suggests on asking on what they do if they feel sad. Mr. Lunt didn't want to at first, but decides to do as he didn't want Larry down.

Segment #2: The Grapes of Wrath (from God Wants Me to Forgive Them!?!)

Once it was done, Mr. Lunt tells Larry that no matter what happens, he can still be happy. Larry agrees that he still has good friends and family. Lunt states they can always get another bear, which unfortunately upsets Larry saying he can't buy happiness. Which they decided to ask the kids that question.

Larry states that regardless if he still has Chestnut and despite his sadness, he knows that everyone still loves him. Just as that happens, Percy shows up with a giant teddy bear, which Larry was grateful for. Percy replied that the bear was still riding in the bus. Mr. Lunt tells him that they still need one more question to ask, which is "what makes them happy?"

Song #3: The Blues With Larry (from Duke and the Great Pie War) 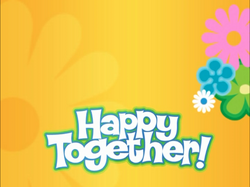 Retrieved from "https://bigidea.fandom.com/wiki/Happy_Together!?oldid=211442"
Community content is available under CC-BY-SA unless otherwise noted.