"Gustav loves nothing but money, he finds folks who run out of money and out of hope then he works them to the bone."
— Epiphanus telling his son about Gustav

Gustav (also known as Gus) is a yellow gourd who runs a fishing business and auto repair shop.

Gustav lived in Greece and ran a fishing business. This made him a rival to Nicky's father. He didn't like the family as they represented hope, and wanted to get rid of it. He finally had the opportunity when Nicky's parents died from an illness and decides to antagonize Nicky for giving fish away.

Prior to Nicky's return, he eventually became Mayor, and made things very strict. When the daughters to his former employee were caught giving away free things, he warned them that they had three days to pay a gold coin each, or else they'd be thrown in jail. However, someone was helping them each night, and he was in a wild goose chase catching the person who was helping the daughters.

Later, he works as a auto repairman for Main Street. Laura's dad asked if he can fix his truck, however, Gustav refused to. Junior and some of the townspeople decided to pitch in to give money for him to fix the truck. Gustav then helped out and fixed the truck just in time for Laura's dad.

However, when Junior asked him to fix the truck, he discovers what it means to be generous and eventually has a change of heart.

Gustav is a yellow gourd with grey hair and brown eyebrows.

Gustav only appeared in Saint Nicholas: A Story of Joyful Giving. 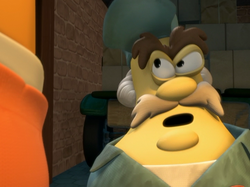 Retrieved from "https://bigidea.fandom.com/wiki/Gustav?oldid=207812"
Community content is available under CC-BY-SA unless otherwise noted.