Sumo of the Opera is the twenty-third episode of VeggieTales.

The main story is a parody on the Rocky and the Karate Kid, with a mix of Gilbert and Sullivan.

The opening countertop sequence finds Bob the Tomato alone with a cucumber sock puppet named Lutfi (played/voiced by Khalil). Larry the Cucumber, we learn, is on his way to do charity work but is having trouble getting there. Bob and Lutfi need to convince him via telephone to persevere rather than giving up and coming home.

The first segment, "Going Up!", is a silent film short based on Laurel and Hardy and The Three Stooges. Three Stooge-like veggies are assigned to deliver a piano to a mansion at the top of a hill. While his fellow workers give up on the seemingly impossible task, Larry perseveres and is rewarded for his eventual success.

In the second segment, Lutfi presents a story about the origin of St. Patrick's Day. Done in the style of a flannelgraph, the story tells about Maewyn Succat, a young English boy who is kidnapped by pirates and sold as a slave in Ireland. His new life is miserable and he spends his days in constant prayer, even as those around him celebrate paganism. When God tells him it's time to leave, Succat runs away and returns to England by way of France. Back at home, Maewyn continues his scholarship and dreams that the people of Ireland are begging him to come back and teach them about Christianity. Succat grows up to become a bishop, is rechristened "Patrick", and fulfills his destiny to return to Ireland and teach the Word of God.

Finally the main segment begins. In Sumo of the Opera, Larry stars as the Italian Scallion, a sumo wrestler who has difficulty taking anything seriously. He succeeds in injuring his sparring partner Po-Ta-To as a result of his clowning around when Po slips on a banana peel and falls from the ring, injuring his back

He is admonished for his joking by Mikey , who accuses him of being weak, lacking ambition, and never completing what he starts. When young Hadrian reminds him that he has not yet fixed his bike. Meanwhile, the Champion, Apollo Gourd, is looking for an opponent now that Po has been injured. The prize is a new "Tiger Bike". Wanting the bike for Hadrian, Scallion accepts the challenge. Mikey agrees to become his trainer on the condition that Scallion does everything he says.

Scallion starts out well and trains hard, but when things get difficult, he quits. However, when Scallion sees Hadrian emulating him he realizes that he must set a good example and persevere. He returns to his training with relish and eventually is ready for his match with Apollo Gourd, though naturally no one gives him a chance. However, Scallion does surprisingly well in the match. He lasts longer in the ring than anyone ever has against Apollo. When they both tumble out of the ring at the same moment, the match is called a tie. Unfortunately this means that Apollo remains the champion. In spite of this, Scallion is victorious for having persevered and even completes the repairs to Hadrian's bike.

Back on the countertop we see that Larry has also persevered and completed his charity work. However, just as both he and Bob were about to get a verse, Luifi meddled inside Qwerty, and made him splutter in smoke.

The Story of St. Patrick

Sumo of the Opera 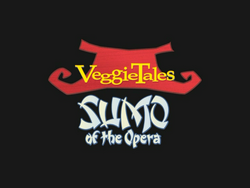 Retrieved from "https://bigidea.fandom.com/wiki/Sumo_of_the_Opera?oldid=7371"
Community content is available under CC-BY-SA unless otherwise noted.