"Simply this, God says He likes it when we share our blessings."
— Ophelia

Lyle the Kindly Viking is the 15th episode of VeggieTales.

The first story is a retelling of "Hamlet", while the main feature is a parody of  a Gilbert and Sullivan comic opera.

Bob and Larry start the show by saying they received a lot of letters about sharing. Archibald pops up and tells them that he'll take over as host for the episode. Reluctantly, the duo decided to let Archie to take over. He decides to start the show with Shakespeare's classic, "Hamlet". However, the French Peas couldn't find it, and founded another story that's similar called "Omelet".

The play starts when trouble brews at the state of Denmark as Horatio claims he used the last of the kingdom's eggs to make Prince Omelet's dish, cooked light ad fluffy. Just Omelet leaves, Ophelia tells him that everyone is starving due to the shortage of eggs. She tells the prince that he should share his eggs, but he refuses to. Later, the prince meets someone who was playing a game by himself. The young lad says he can joined, just as he sees Omelet's dish and states it looks delicious. The prince decided to let the lad eat his dish, which suddenly made himself feel better. The princes announces later that he'll share his eggs with everyone, but the chef remarks there's not enough eggs, until Polinius states he has plenty of them. Horatio decides to call the eggs cooked light and fluffy dish after their prince, the Omelet! The play ends with Larry and Junior looked very shocked. Afterwards, Archibald then states that the musical duo Gilbert and Sullivan might have a lost musical thanks to Jean Claude and Phillipe, called "Lyle the Kindly Viking", which is a musical pop-up book.

The story starts with Mabel and Penelope talking about their husbands who sail out to sea, which it turned out to they're vikings. They're lead by Olaf, who is the main viking in charge, and they sail out to steal whatever they want. All, but one behave like this, and the one who is completely different is Lyle. When he arrived, Olaf wasn't pleased that he missed out on the raid the other vikings were in. Lyle was very friendly and likes crafting pot-holders, which he gives to others. The other vikings don't know why Lyle doesn't participate, so Sven and Ottar decided to spy on the little viking to see what's going on.

The two discovered that Lyle was at the monastery they raid before, and was giving some of the goods back to the monks, including some of pot holders. This made the monks very pleased with him, but not with Sven and Ottar when he returned. Lyle then told them that when you share with others, you'll gain something else. The two thought about this and discovered the little viking had a point. Regardless, they don't want Olaf to know what's going on, so they decided to keep this a secret.

Unfortunately, this wasn't kept very long. The next day when the vikings were gonna raid the monks again, Ottar discovers Lyle is there and both he and Sven tried to distract Olaf from looking over there. But they couldn't keep up, and soon Olaf and the other vikings discovered Lyle's doings. Just as it's about to storm, the main viking boat bumps into Lyle's and Olaf tears the sails off and threw away the oars for not being a true viking. Then the storm blew over the main viking ship, tossing all of the vikings off, the helpless Lyle gets into trouble as the waves flipped his boat over. The monks decided to help Lyle, and the other vikings saw the action and discovered what their doings were wrong. Lyle wanted to help rescue his viking friends, but the monks hesitated due to them being mean. However, Lyle persuades that God need them to help others, and not just those who are nice. Ulitmaly, Lyle and the monks saved the other Vikings from the storm. They later thanked them for rescuing and learned about the importance of sharing. Sven asked if this means they can't be vikings, and the head monk states they still can, but they need to change their song, though. Then it ends with Lyle and the vikings singing that they're vikings and they like sharing with others.

After the story ends, Archibald discovers the story's not from the exact Gilbert and Sullivan, and chases the French Peas for not making the show how Archibald wanted. Bob and Larry concluded the show on what they learned. 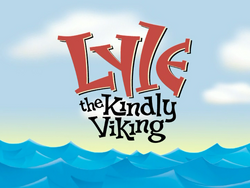 Retrieved from "https://bigidea.fandom.com/wiki/Sumo_of_the_Opera?oldid=8573"
Community content is available under CC-BY-SA unless otherwise noted.