Greta Von Gruesome (also known as Greedy Greta) is Larry-Boy's recurring villain who is the ruling despot of Zuchinnia, a tiny country north of the Bumbly Mountains.

The origins of Greta Von Gruesome are shrouded in mystery, obscured by controversy, and blocked from view by a water buffalo with a bad attitude. It is rumored that she began her life of crime by stealing lollipops in the back streets of Finsterminster. The closest evidence of her past is that she was inherited her uncle's wealth, including his castle. Despite being wealthy, she bought anything that she wanted. However, when buying didn't seem fun for her, she turned to stealing. This was the start of her villain career, because greed revolved around the choices that she made. She's looking to attain happiness, but her greed isn't doing her favors; and yet, she keeps feeding into her greed.

She first bought every Hula Heidi doll from Mr. Snappy's Toy Emporium as she is a fan of the line, and to create an army. Greta also kidnapped, or "yodelnapped" Einger Warblethroat along wit the other famous yodelers as part of her collection.

She later teamed up with Awful Alvin and Lampy. 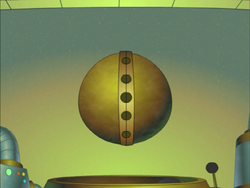 Retrieved from "https://bigidea.fandom.com/wiki/Greta_Von_Gruesome?oldid=208654"
Community content is available under CC-BY-SA unless otherwise noted.