Granddad was the husband of Grandmum and the grandfather of Jason and Michelle Conrad. He was also a scientist and darts champion.

Granddad was best known as a dart championship, participating at dartboard tournaments for the Queen of England.

He later married a photographer who worked at the London Evening Times.

They then moved to the Falkland Islands where they had many, many children. Though they moved to the United States after Grandmum accidentally caused the Anglo-Argentine War of '82.

His fate afterwards is unknown, though it can be assumed that he died.

According to Grandmum, Granddad was a nice and charming man.

Granddad had three strands of white hair sticking on each side of his head. He wore round glasses. 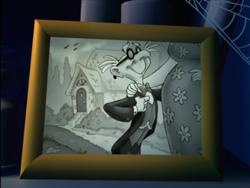 Retrieved from "https://bigidea.fandom.com/wiki/Granddad_Conrad?oldid=194933"
Community content is available under CC-BY-SA unless otherwise noted.