Goliath is a giant Philistine warrior.

The Israelites agreed with their enemies the Philistines that they would choose two champions to fight each other, and whoever's side won would rule over the other. The Philistines chose the giant Goliath, and Dave volunteered to fight for the Israelites. Even though Goliath was much bigger and stronger, Dave defeated him with a slingshot and a pebble, but most importantly, with the help of God.

Goliath makes a brief appearance in Josh and the Big Wall!, having a cookout with his family in the Promised Land, but unfortunately scaring away the Israelites who arrived there.

He also appears in Madame Blueberry on a menu in Stuff-Mart, fighting the Fib.

Goliath is a big green pickle. He has warts and hairs all over him. He has a big nose and eyes. When he fought Dave, he changed into red wrestling pants and boxing gloves. 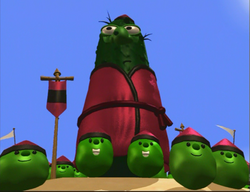