Fly By Might is the first LarryBoy Super Short.

Mild-mannered Larry is relaxing outside his mansion and is planning to take a snooze, until a fly lands on his nose. He gets very annoyed about this, so he plans to get rid of it. Larry tries to use bug spray, but he faints. Larry then tries to use a water hose, but the water splashes on his face, so he puts his LarryBoy gear on and uses his plunger ears to catch the fly. He tries to catch it several times before he sticks himself to a fast-moving truck. LarryBoy screams in agony before he smashes into the truck. After he smashes into the truck, the fly laughs as LarryBoy angrily stares at it. He launches a frog out of his utility belt, but the frog refuses to eat the fly, and then hops away on the road. LarryBoy angrily looks at the fly laughing again, and then he uses a vacuum to try to catch the fly. However, the fly is really fast and ends up out-flying the force of the vacuum hose, the latter of which ends up sucking up a pillow instead. LarryBoy notices the vacuum getting stuck by the pillow, causing it to get buffed up after it explodes.

Finally, the cucumber of steel gets into the LarryMobile and uses it to try to run the fly over. But it topples over when the fly put its leg out. LarryBoy decides to transform the LarryMobile into its LarryPlane mode and uses the plungers underneath to pull a piece of land with the fly on it off the ground. The LarryPlane is about to carry the piece as the fly shakes in fear. The fly looks at the LarryPlane carrying the piece, but it cannot carry the piece because it is too heavy, which then plummets towards the ground, crashing through it. LarryBoy survives in dizziness, but he gets tired out, and the fly relaxes on top of LarryBoy's head, drinking from a cup and sitting on a chair. 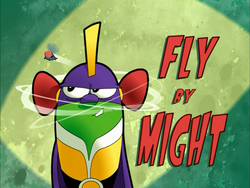 Retrieved from "https://bigidea.fandom.com/wiki/Fly_By_Might?oldid=220369"
Community content is available under CC-BY-SA unless otherwise noted.