Their main purpose is to grow from someone lying about something, and they'll grow to enormous monsters and cause destruction whenever they like. The only way to stop them is to eventually tell the truth, and the monster will shrink and vanish.

Fibs have three forms. The first form is just a small ball-like shape with spots, similar to Lumpy but with an antenna. They'll grow bigger with a body and legs. Once the lie is big enough, they'll turn into giants with arms with three fingers. Tim Hodge in the How to Draw series stated they're built similar to a snowman.

Fibrilous Minimus (commonly known as Fib) is the main antagonist of Larry-Boy! and the Fib from Outer Space!.

He was the first fib to land on earth. Jimmy and Jerry discovered it as a shooting star when it was falling into the atmosphere. He adopted a friendly demeanor to become Junior's "friend" when his dad's plate broke and Fib told him to make up a story that someone else broke it.

After Junior told a few lies, Fib became gigantic and decides to switch natures, destroy Bumblyburg, and hold Junior in his clutches.

Suddenly, Junior discovered that Fib had only become his enemy.

LarryBoy did not defeat the Fib, as he was squeezed until his plunger popped out and almost eaten alive.

Once Junior realized that he's the only one to stop it, he told everybody the truth & in the end, he was defeated by Junior telling the truth before he could eat Junior and Larry-Boy.

He speaks in a New Jersey-esque accent.

At first, he seemed like a nice little alien, but he can get to be an extremely big problem once Junior told a few lies. The Fib, when big was truly manipulative, traitorous, violent and deceiving. At first, he seems to be helpful and cooperative when he helped Junior get out of trouble. However, when he reached his maximum height, he begins to be rather destructive and obstreperous when he causes a mess.

He is also shown to be very greedy, oppressive, temperamental and dangerous when he tried to eat Junior and LarryBoy. Just like the old saying, one little lie can get bigger and bigger. And that alone is what Fib did.

After the blue Fib's defeat a red colored fib landed in Bumblyburg, on the same street as Junior Asparagus'.

It's unknown what happened to it after the episode ended, but just like the Blue Fib, it's possibly looking for somebody to help it grow. 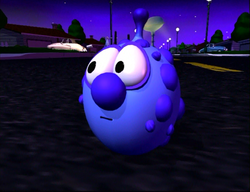