2 minutes, 36 seconds
Fair and Square is a song from The Cheating Scales of Bullamanka. The song merely talks about that since cheating isn't good, it is important to play by the rules.

Rusty: How many mutants of Jadon-9 does it take to screw in a light bulb?

Ventrilomatic: That data is unavailable.

Rusty: Tell me, why did the robot cross the road?

Ventrilomatic: I don't know, why did the robot cross the road?

Rusty: Because it was carbon-bonded to the chicken! speaking of crossing the road, I thought we were gonna take a trip to the sun.

Ventrilomatic: That is absurd, our chassis would not withstand the intense heat of a journey to the sun. how would we accomplish this objective?

Rusty: We just go at night. speaking of the sun, Two hydrogen atoms were walking down the road.

Rusty: No, Two hydrogen atoms were walking down a different road, and one says to the other, " Oh dear, I think I've lost an electron!" "Really?" The other asked. "Are you sure?" "Yes, I'm positive!"

Café Announcer: Alright, That was the Ventrilomatic and Rusty. and appearing next on stage here at the Fabulous Comet Lounge, their very first appearance anywhere, It's a small group of penguins.

Other three: He is aware...

Kevin: That you don't play fair...

Other three: You can see it on his face

Other three: You can tell because he frowns

Kevin: When you do that thing...

Other three: The bloke who cheated in the show!

Zidgel: You say G-7's empty as you smile and bite your lip, But you know from the four pegs in a row that he sank your battle ship.

Midgel: And you're tellin' her to go fish. It ain't goin' like you planned 'Cause the hearts that she just asked for are beatin' in your hand.

Penguins: Ohhh! You hate to be the loser so you always gotta win. But I'm tellin' you, son. Playin' ain't no fun with a cheatin' champion! Yeah! Take another look at the Good Book. God wants us to play fair Yeah! Winnin' is for losers unless it's fair and square!

(cuts to the other characters dancing)

Penguins: Yeah! Winnin' is for losers unless it's fair and square!

Fidgel: You say it's Colonel Mustard in the den with the candle stick, But that's not right 'cause Mrs. White's in the ballroom with a brick.

Zidgel: And you move your bishop sideways, hey. So your pawn can steal my queen, ooh

(Midgel shows a sign with a image of ham)

Zidgel: Man, I ain't staying with you dirty playing. It's the worst I've ever seen! 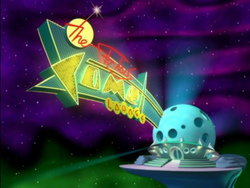 Retrieved from "https://bigidea.fandom.com/wiki/Fair_and_Square?oldid=216912"
Community content is available under CC-BY-SA unless otherwise noted.