Esther: The Girl Who Became Queen

"You never need to be afraid to do what's right."
— Mordecai's catchphrase

Esther... The Girl Who Became Queen is the fourteenth episode of VeggieTales.

It is based on the story of Esther from the Old Testament with elements inspired by Paramount Pictures' The Godfather and Warner Bros' Casablanca.

The story opens at 3:00 A.M. at a palace in Persia where Haman, King Xerxes' (Mr. Nezzer) right-hand-man (Mr. Lunt), is throwing Queen Vashti out for insubordination (as she refused to make Xerxes a sandwich). A search is then initiated to find a new Queen.

The following day, we are introduced to Esther and her cousin Mordecai (Pa Grape) who are found talking in the city streets. Esther is asking for Mordecai's advice, but his advice reveals that Esther knows what to do but that she lacks the courage to do it. He tells her that she should not be afraid to do what is right: to confront her friend who stole an apple. Suddenly, Haman drives up in a pea-driven car-wagon to collect the eligible maidens for the King. Mordecai quickly hides to avoid Haman from seeing him. Haman then spots Esther and demands she come with him, despite her clear disinterest. Trying to come up with an excuse to stay, Esther remembers Mordecai and begins to explain she needs to take care of her cousin. Before she can finish, Mordecai swiftly shushes her, causing Haman to notice and recognize him. He orders him to bow in his presence, but Mordecai refuses as he bows down to no one except God and King Xerxes. Haman becomes furious and has Esther taken to the palace with the other maidens, though the relationship between Mordecai and Esther is kept secret.

Esther and Mordecai manage to meet again later that night at the palace, and Mordecai apologizes to Esther for all the shushing. But he reveals the reason why he shushed her: to protect her. Mordecai explains that she mustn't let anyone know that she and Mordecai are apart of the same family. Esther becomes frustrated. She doesn’t want to stay in the palace and asks Mordecai why things have to be this way. Unsure but hopeful, Mordecai tells her he believes God knows and maybe there's a reason why she's there. He leaves to avoid getting caught, but promises Esther he'll come visit her again. Esther then calls out to God, asking Him to show her the reason behind her being taken to the palace.

In another part of the palace, Xerxes and Haman audition the maidens to be the new Queen. When Esther takes the stage and sings, Xerxes is left in awe and the decision is made. However, Esther does not wish to be the Queen, but regardless she is crowned and ensconced in her new life against her will. One day in the throne room of the Perisan palace, Xerxes is visited by Bigthan Peaoni, one of the two Peaoni brothers (Jean-Claude Pea), who has brought him a large cake. Unannounced visitors are not permitted, but Xerxes allows him to be heard. Peaoni convinces him to come to look closely at the cake, while Peaoni's brother Teresh Peaoni (Phillipe Pea) hangs onto a rope, the other end of which supports a grand piano from 1750 A.D. suspended above the cake. Mordecai, who is hiding in a corner to avoid Haman, observes the plot and informs Esther. Esther warns Xerxes in time and Teresh and the piano crash harmlessly onto the cake. Xerxes thanks her for saving his life, but she indicates Mordecai, saying that the credit should be his.

Haman banishes the Peaoni Brothers to the Island of Perpetual Tickling for their crimes of attempting to crush Xerxes and for entering the throne room uninvited. Though Xerxes believes he is safe, Haman convinces him that a greater threat awaits. There is a family that cannot be trusted, he claims, and pose an imminent danger to Xerxes. Unaware that Haman is talking about Mordecai, Xerxes unwittingly authorizes an edict to have him and his family banished to the Island of Perpetual Tickling. Mordecai finds the edict posted among other posters and visits Esther on her balcony at the palace. He appeals to his cousin to reveal Haman's evil plans to Xerxes, but Esther is afraid as she lacks the courage to confront Xerxes and struggles with what to do.

Mordecai then reminds her that she never needs to be afraid to do what's right. Esther was still afraid, and was still unsure about what she should do, but she eventually redeems herself as she finally embraces her new position as queen and decides to do what is right.

However, action does not come easy for Esther. Twice, she attempts to inform Xerxes, and both times she fails, lamely inviting Xerxes and Haman to dinner instead. Meanwhile, Haman attempts to get Mordecai to bow to him again and threatens to have his banishment carried out immediately when he refuses.

Meanwhile, at the palace, Xerxes makes his scribe Markus (Larry the Cucumber) to read what has happened since Esther has been appointed queen. Xerxes declares his plan to do something in Mordecai's honor for saving his life. Haman then comes to request Xerxes about him carrying out Mordecai's banishment fast, but is foiled when Xerxes says he needed to do something special for someone special. Thinking that the "special guy" is him, Haman tells Xerxes that the "special guy" should deserve a parade. Xerxes thanks Haman for the idea, saying that Mordecai really deserves a parade, utterly humiliating Haman. On her third attempt, Esther is finally able to muster up the courage to face Xerxes. She reveals that Mordecai is her cousin and that Haman has been plotting to destroy him and his family, which includes her. Xerxes, who respects Mordecai, loves Esther and would never harm both of them and their family, believes her and banishes Haman to the Island of Perpetual Tickling. Mordecai ends up filling Haman's former position as Xerxes' right-hand-man as Esther, having saved her people, gazes out the side of the palace with a smile. 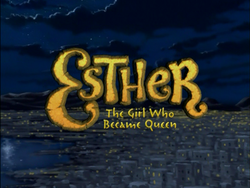