Ephraim Apply is a immigrant who came from the Cauliflower. He is a ancestor of the Bad Apple.

Apply was one of the passengers on the Cauliflower who wanted to find land. After Obadiah Bumbly founded the land that would become Bumblyburg, Ephraim wanted to take over the village and made Apply's Funhouse, an attraction that would distract the villagers. Unfortunately, this was foiled by the founder when he saw the lack of construction and stop the apple's bad deeds. Because of this, he was banished by citizens, never to return again.

His descendant would later take revenge on this.

Ephraim is very sneaky and cunning, and always wanted to take over Obadiah Bumbly's village.

Ephraim Apply is a red apple with green facial hair. He wears a ruff around him. 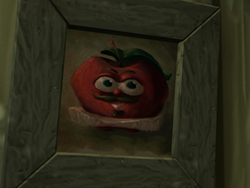 Retrieved from "https://bigidea.fandom.com/wiki/Ephraim_Apply?oldid=190253"
Community content is available under CC-BY-SA unless otherwise noted.