Dave and the Giant Pickle

"With God's help, little guys can do big things too!"
— Dave singing to King Saul

Dave and the Giant Pickle is the fifth episode of VeggieTales.

The episode is a retelling of the Bible story of David and Goliath that focuses on the topic of self-esteem. Also featured is the first appearance of Larry’s superhero alter-ego, Larry-Boy.

The show opens up with Larry dressed as his alter-ego Larry-Boy with a cardboard cutout of a city skyline. He demonstrates his super-suction ears by jumping on a cardboard building. He gets stuck as Bob walks out on the countertop. Larry asks for Bob's help getting down but falls off before Bob can actually help him. When Bob asks Larry to get out of his costume, Larry says that he doesn't feel special about his normal self. Bob then mentions that he got a letter from Myra Eggleston from Youngstown, Pennsylvania. She says that her siblings are all older than her and can do all kinds of things, but she's too little for any of those things and wonders what's special about her. Bob then tells the story of Dave and the Giant Pickle.

A long time ago in a country named Israel, Dave (Junior Asparagus) was a shepherd who lived with his three brothers (Jimmy and Jerry Gourd and Tom Grape) and his father Jesse (Pa Grape). Every day while Dave tended his sheep, the sheep would tip over and his older brothers would pick on him by making him pick up their tipped over sheep and get them food. One day, Jesse comes running to the boys to tell them something. He accidentally bumps into a line of sheep and asks Dave to pick them up, which utterly irritates Dave. Jesse tells his sons that Israel's sworn enemies, the Philistines, are attacking. In order to defeat them, Israel's king, King Saul (Archibald Asparagus) is putting together an army to defeat the Philistines. Dave and his brothers head towards the battlegrounds, but Dave is stopped by his father. Jesse tells Dave that he was too small to fight for the army, and leaves Dave to take care of the sheep himself. As he watches his brothers and father go to battle, Dave becomes sad and wonders why little people couldn't do big things.

The Israelites are frightened by the sight of Goliath and they run away and hide. Goliath came back day after day for 40 days to see who would fight him. But every time he showed up, all the Israelites were in hiding. After a while, Jesse begins to worry about his boys, and he sends Dave to the campgrounds to deliver some pizza. On the grounds, Dave sees his brothers in hiding from Goliath and overhears Goliath calling the Israelites cowards. Fed up with no one willing to fight Goliath, Dave goes to King Saul and says that he'll fight Goliath. King Saul has major doubts that Dave, at his young age, can defeat Goliath. Dave, through song, convinces Saul to let him out on the field. Saul tells Dave to put on his old royal armor. Dave's not fit for the armor and says that he'll confront Goliath with all he has and the will of God. Saul reluctantly lets Dave go out and fight.

As Dave heads for the camp, he stops by a stream and picks up five smooth stones. At the camps, Dave goes to Goliath and accepts his challenge. Goliath suits up in his boxing uniform and heads out in the battlefield and confronts Dave. Dave then takes a stone he picked up and uses a slingshot to fling a stone at Goliath. The stone hits Goliath's head, knocking him completely out. The Israelites are cheering with victory as the Philistines run away in defeat and fear. The story ends with Dave riding on his sheep in the sunset, and falling off.

Back on the countertop, Larry's moved by the story. The Bible verse of the day is Matthew 19:26; with God all things are possible. Larry thinks that he can do anything he wants and says that he wants to be a chicken. Bob then corrects him by saying that the verse means whatever God wants us to do, we can do. Larry then says that thanks to the story, he feels special! Bob also says to Myra that he hopes that the story made her feel special too. As Bob leaves the countertop, Larry stays behind to play around as Larry-Boy for fun. He then uses his super-suction ears to hang onto the camera and gets stuck then falls off onto the kitchen floor.

The episode was the easiest made in just four months with eight people and everything was on budget, on schedule, and no one got tired making it and had a ball doing it. It even proved to be a favorite. 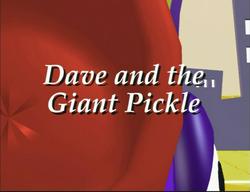