The Dark Crow (sometimes known as D.C.) is the defender of Lollyhaven. He is also one of Bok Choy's students at Bumblyburg Community College.

It's unknown about Dark Crow's past, but it was at his hand, or lack of hands, that the nefarious Whoop-Golly Gang was captured and put behind bars. He also had a history with Greta Von Gruesome in the past.

A thinking type of hero, Dark Crow is dedicated to hunting down and defeating evil whatever it may lurk. However, this causes him to sleep too much.

Unlike Larry-Boy, he takes his job seriously and thinks he's not a real hero.

The Dark Crow is a Hispanic purple grape. He speaks in a Spanish accent.

He wears a metallic suit that resembles a motorcycle helmet with a yellow fin and mask plate. He also wears a purple belt and a yellow cape. Concept art displays the suit, resembling a crow's head. In some of the book adaptions, his suit is red and black.

Much like Larry-Boy, his super suit is mechanical. Each side of the suit has a utility disc that contains retractable talons, that act as his hands. He also has wings that pop out from behind and make him glide. 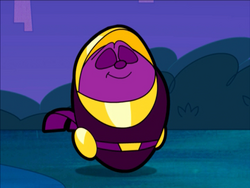