Curly is a partner who work for the Bad Apple.

He first helped out the Bad Apple by giving out the temptations of Mayor Blueberry, Petunia Rhubarb, and Larry-Boy. Unfortunately, he still hadn't figured out the hero's temptation yet, though he tracked him down and found out not only Larry-Boy's, but also Alfred's temptation.

Curly later helped out the Apple by inflating the new Apply's Funhouse and tried to persuade the citizens of Bumblyburg inside. However, this was stopped by Larry-Boy, and he was arrested.

Very sneaky and smart, Curly can pass through others without anyone noticing. He is also shown to be a good speaker to knows how to attract consumers.

Curly is a worm with purple eyelids and wears a stetson. He also speaks in a Brooklyn-esque voice, making him sounding like a carnival barker.

Tim stated he wanted to create a worm character to be paired up with the titular villain, but because of why they changed Khalil, they faced a challenge on how to make him not slither like a snake. So Tim Hodge designed him to move like some sort of a spring, similar to Doug TenNapel's Earthworm Jim. 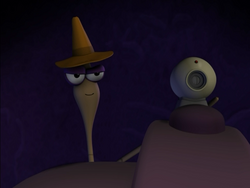 Retrieved from "https://bigidea.fandom.com/wiki/Curly?oldid=197240"
Community content is available under CC-BY-SA unless otherwise noted.